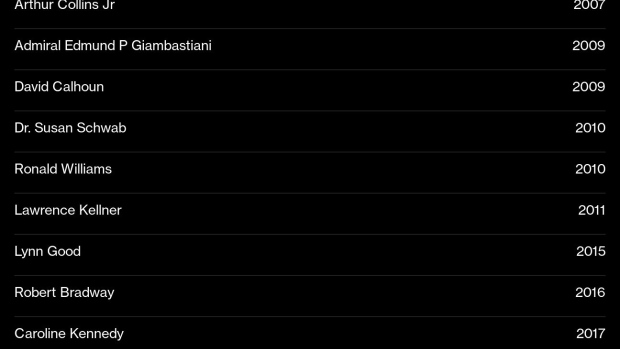 (Bloomberg Opinion) -- When Boeing Co. CEO David Calhoun was asked last month how he would fix the 737 Max crisis as a long-time insider, he bristled at the label, telling reporters, “I watched the same movie you did.” Calhoun, of course, was hardly just an observer, or shouldn’t have been: He has been a director at the company since 2009. A pair of board changes announced on Monday should be viewed in that context. The rejiggering is fine, but ultimately just a Band-Aid over the bigger question of the board’s accountability for one of the ugliest period’s in the company’s history.

Boeing directors Edward Liddy – the former CEO of Allstate Corp. and an interim leader at American International Group Inc. during the financial crisis — and Michael Zafirovski, a former General Electric Co. executive and an adviser to Blackstone Group Inc., will step down. Zafirovski was Boeing’s longest-serving director at more than 15 years, while Liddy has been on the board since 2010 following an earlier stint that was disrupted by his appointment at AIG. Neither had direct experience in commercial-aerospace development. They will be replaced by Qualcomm Inc. CEO Steve Mollenkopf and former United Technologies Corp. CFO Akhil Johri. Mollenkopf’s engineering degree fits with Boeing’s pledge to staff its board with that kind of expertise amid criticism that it lost sight of technical priorities in the pursuit of ever-higher profits. Johri brings the perspective of someone who’s been on the other side of Boeing’s aggressive stance toward its suppliers and could be an asset in healing those relationships.

Cleaving off long-serving directors and those with less helpful expertise is a good and necessary move. But that’s an odd juxtaposition to Calhoun himself, who is now the second-longest serving director and whose background in private equity and as a GE executive under Jack Welch at least on the surface seems anathema to the cultural changes that are needed at Boeing.(1) Among the legacy directors that remain, the median tenure is nine years. Point being, more needs to be done. Shareholders will have an opportunity to lodge symbolic protest votes against the current slate at Boeing’s annual meeting, which is likely to take place in April. But there’s something to be said for a more proactive, deep overhaul, much like what took place at GE.

On the bright side, Boeing seems to have finally woken up to the terrible optics of the special $7 million bonus for Calhoun tied to the safe return of the 737 Max. In a filing on Monday, Boeing spelled out additional milestones that Calhoun must hit by 2023 in order to receive the payout. These include stabilizing the KC-46 military tanker program that’s struggled with production setbacks, and successfully guiding the 777X into service after the widebody jet’s first flight was delayed by teething issues with the engine. Calhoun also must follow through on Boeing’s commitments for building a bigger services business and finally close the company’s joint venture with regional-jet maker Embraer SA, which is being held up by a regulatory review from the European Union. On top of that, Boeing’s Starliner spacecraft needs to successfully complete a manned flight after an uncrewed mission in December was aborted amid what NASA has called “critical software defects.” And lastly, Calhoun must “strengthen engineering” at the company.

It’s still not clear why Calhoun needs a special bonus on top of a salary and a regular bonus to incentivize him do his job. But that lengthy list of priorities and tasks is a testament to just how deep the problems run at Boeing. Whether a guy who’s been on the board for a decade can deliver on all of these goals in a way that redefines the company’s ethos and culture remains to be seen.

(1) In somewhat of an interesting twist, Mollenkopf spent about a year and a half on the board of GE. He was appointed in 2016 under Jeff Immelt, but stepped down in 2018 as Immelt's successor John Flannery rejiggered the board and as Mollenkopf's company fended off a hostile takeover approach from Broadcom Inc.