Boeing Co.’s (BA.N) US$600 billion-plus order book for its 737 Max began shaking after several big customers threatened to reconsider their purchases in the wake of the Ethiopian Airlines crash, the second deadly accident involving the plane since October.

VietJet Aviation JSC, which doubled its order to about US$25 billion only last month, said it will decide on its future plans once the cause of the tragedy has been found. Kenya Airways Plc is reviewing proposals to buy the Max and could switch to Airbus SE’s rival A320. Russia’s Utair Aviation PJSC is seeking guarantees before taking delivery of the first of 30 planes.

That’s as Indonesia’s Lion Air firms up moves to drop a US$22 billion order for the 737 in favor of the Airbus jet, according to a person with knowledge of the plan. Separately, Garuda Indonesia plans to cut orders of the Boeing plane and a US$5.9 billion order from a unit of Saudi Arabian Airlines hangs in the balance.

The 737, which first entered service in the late 1960s, is the aviation industry’s best-selling model and Boeing’s top earner. The re-engineered Max version has racked up more than 5,000 orders worth in excess of US$600 billion, including planes that have already been delivered.

Boeing, whose shares have lost 11 per cent of their value this week, faces escalating financial risk after two disasters involving its newest narrow-body jet in the past five months. The stock inched up 0.5 per cent on Wednesday in New York after seeing its biggest two-day drop in almost a decade.

The deadly crash in Ethiopia comes just about five months after the Oct. 29 crash of another Boeing 737 Max plane, operated by Indonesia’s Lion Air. The relationship between the carrier and Boeing soured after the manufacturer pointed to maintenance issues and human error at Lion as the underlying cause, even though the planes pilots had been battling a computerized system that took control following a sensor malfunction.

Sunday’s loss of an Ethiopian Airlines 737, in which 157 people died, bore similarities to the Asian tragedy, stoking concern that a feature meant to make the upgraded Max safer than earlier planes has actually made it harder to fly.

Boeing is in crisis as most of the world grounded the plane. On Wednesday, U.S. regulators joined the global chorus by grounding the plane, citing evidence showing the Ethiopian Airlines flight may have experienced the same problem as the plane that went down five months ago off Indonesia.

“With extensive grounding of the 737 Max, near term news could get worse for Boeing before it improves,” Cai von Rumohr, an analyst with Cowen & Co., said in a note. However, he added, because the company is readying an update to its flight-control software, “we don’t see meaningful long term risk.”

Indeed, the only real rival to Boeing is European planemaker Airbus, whose production line for the A320neo is full well into the next decade. Alaska Air Group Inc. said Wednesday it would take delivery of its first Max aircraft. 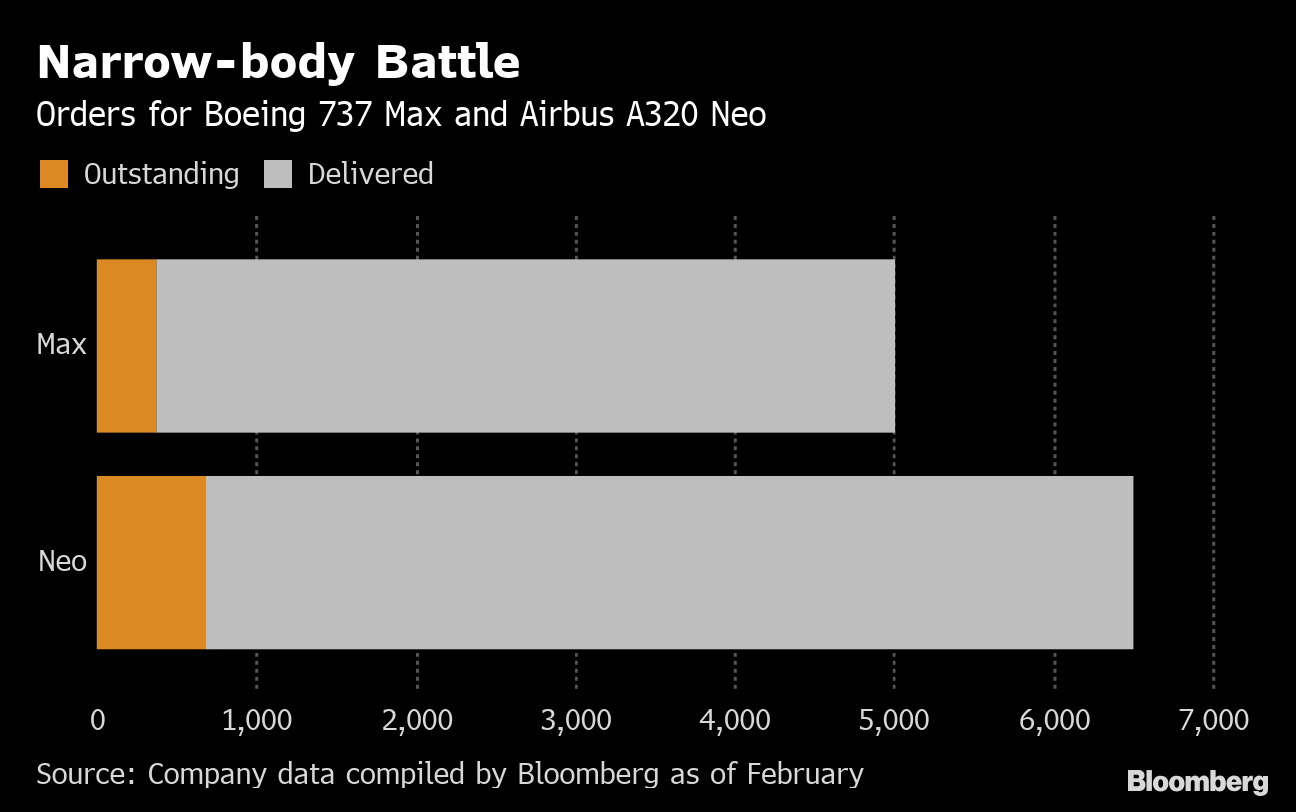 VietJet is monitoring the situation and will reach a decision on whether to go ahead with its purchase following “official conclusions” from global regulators and the Civil Aviation Authority of Vietnam, it said in a statement Wednesday.

Utair told RIA Novosti that it’s waiting for results of the Ethiopian crash probe before proceeding with the first delivery on an order for 30 737 Max jets. The company is seeking assurances from Boeing, it said.

Flyadeal, a unit of Saudi Arabian Airlines, said in December it would switch from Airbus and purchase up to 50 737 Max jets, subject to final terms being reached. The company says it’s waiting on the results of the investigation. “We’re closely monitoring the situation and are in constant contact with Boeing,” the company said in an email. “There are no conclusions to be drawn at this time.”

Lion Air was already looking at scrapping its Boeing deal after October’s crash, which killed 189, and the latest disaster has made co-founder Rusdi Kirana more determined to cancel the contract, according to the person familiar with the situation, who asked not to be named as the plans are private.

Kenya Airways will consider switching to Airbus or could opt to take more an the older version of the 737 Boeing jet, which doesn’t feature the suspect system, Chairman Michael Joseph said in an email, without ruling out sticking with the Max. The company revived plans to expand its network last year with a proposal to buy as many as 10 of the planes worth about US$1.2 billion.

Some 32 of those killed in the Ethiopian crash, which occurred six minutes after takeoff from Addis Ababa, were Kenyan citizens, the most for any single country.

“We will carefully follow the developments around the 737 Max,” Kenya Airways’ Joseph said. “No decision has been taken yet.” Sub-Saharan Africa’s third largest carrier is almost 50 percent state-owned after a reorganization in 2017.

Kenya Airways has about 40 aircraft including eight 787 wide-bodies and the same number of an older version of the 737, the 800. The Dreamliner fleet will likely expand to add long-haul services, Joseph said, requiring more smaller planes to feed them with customers. Those might include turboprops and Airbus A220 or Embraer SA E2 regional jets, as well as 737-sized models.