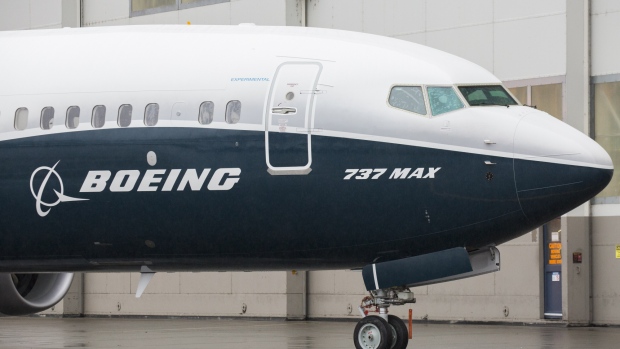 The Boeing Co. 737 Max 9 jetliner stands at the company's manufacturing facility in Renton, Washington, U.S., on Tuesday, Mar. 7, 2017. Boeing is holding intense discussions with airlines and lessors for the Max 10X and has "extended business offers" to some potential buyers as it builds a case for the narrow-body jet, said Boeing Vice President of Marketing Randy Tinseth. The decision on whether to launch the plane is expected this year. , Bloomberg

The Chicago-based planemaker will inaugurate its completion and delivery center in Zhoushan, 90 miles southeast of Shanghai, on Saturday, after more than a year of construction. The facility marks a rare industrial foray outside of the U.S. for Boeing and a joint venture with state-owned planemaker Commercial Aircraft Corp. of China Ltd.

While the plant was sent in motion before U.S. President Donald Trump was elected, the ribbon-cutting risks being overshadowed by his tit-for-tat on duties with China on products ranging from cars, machinery to pork and soybeans. A three-month truce announced earlier this month has been under threat since the arrest of Huawei Technologies Co.’s chief financial officer in Canada after the U.S. sought her extradition on allegations of violating Iran sanctions.

The Zhoushan facility, with roots on both sides of the Pacific, is emblematic of the balancing act for Boeing in China. The planemaker’s ties date to President Richard Nixon’s 1972 arrival in China aboard a Boeing 707. Chinese workers at the new plant will put the finishing touches on U.S.-built planes flown over from a Seattle-area factory, before delivering them to local customers.

“It’s difficult to overestimate the importance right now of China as a customer,” said Ken Herbert, analyst with Canaccord Genuity.

About one of every four jets that Boeing builds is bound for China, while the country’s airlines are the biggest buyers of the 737, the manufacturer’s largest source of profit. China is expected to need about 7,700 commercial planes over the next two decades to connect an increasingly mobile middle class. That represents a $1 trillion market opportunity for Boeing, Airbus SE and homegrown rivals like Comac.

Handing off light manufacturing to the new completion center could also free up valuable capacity as Boeing charts 737 production increases well beyond the 57-month rate set for 2019. The company only builds the narrow-body jets at a single site in Renton, Washington. Airbus has such four plants scattered around the globe for its competing A320 family of planes -- including one in China.

But Boeing’s commercial stronghold in China is increasingly threatened by Airbus’s large industrial investment, as well as the trade warfare stoked by President Trump. While aerospace has largely been excluded from the wrangling, China has sent subtle reminders that the sector remains at risk.

The nation, at one point, threatened to slap a tariff on older 737 models. More recently, Xiamen Airlines, majority owned by state-run China Southern Airlines Co. and an exclusive operator of Boeing jets for more than 30 years, has struck up talks with Airbus, Bloomberg reported.

Boeing, the largest U.S. exporter, has urged both governments to resolve their trade differences and protect aerospace, which generates about an $80 billion annual trade surplus for the U.S.

“Both countries are motivated to have a healthy aerospace ecosystem,” Boeing CEO Dennis Muilenburg said in a Dec. 6 interview with CNBC. “We’re certainly very engaged with governments in both countries and we’re going to do what we can to assist and help reach a positive conclusion.”

Airbus has been assembling its narrow-body A320s in China for about a decade, recently expanding its Tianjin campus to include a completion and delivery center for its wide-body A330s. Like at Boeing’s Zhoushan facility, seats and other cabin equipment are installed in planes built outside the country.

Boeing’s more cautious approach to technology transfer in China reflects a manufacturing strategy rooted around its traditional Seattle-area industrial hub. The company has no other overseas factories although McDonnell Douglas Corp., which Boeing bought in 1997, invested heavily in Chinese production of the MD-80. The effort eventually flopped.

“Considering they have a lot of people who lived through the sheer expensive pointlessness of the McDonnell Douglas investment there, I see their caution,” said Richard Aboulafia, an aviation consultant. “And having a line there, no it hasn’t bought Airbus anything.”

Joanna Lu, an analyst with the consulting arm of FlightGlobal in Asia, agreed that Boeing’s more limited manufacturing presence in China probably doesn’t put it at a disadvantage to Airbus since Chinese airlines still mainly purchase planes built in Europe and the U.S.

While Boeing holds a sales lead over Airbus in China, that gap is narrowing. As of August this year, Boeing has 1,670 planes in service in China, followed closely by Airbus with 1,598 planes, according to data from CAPA Centre for Aviation. The European planemaker hired a veteran Chinese official as its new China chief to improve relations with government and customers and opened an innovation center in Shenzhen, a southern Chinese tech boomtown.

And with China expected to be a key market for a proposed new Boeing mid-range jetliner, dubbed the 797 by analysts, the work done in Zhoushan could grow over time.

“This is probably the first step in what could be a longer, more substantial course of Boeing into China,” said Herbert.

--With assistance from Bruce Einhorn.

To contact Bloomberg News staff for this story: Dong Lyu in Beijing at dlyu3@bloomberg.net;Julie Johnsson in Chicago at jjohnsson@bloomberg.net

To contact the editors responsible for this story: Anand Krishnamoorthy at anandk@bloomberg.net, ;Brendan Case at bcase4@bloomberg.net, Sam Nagarajan