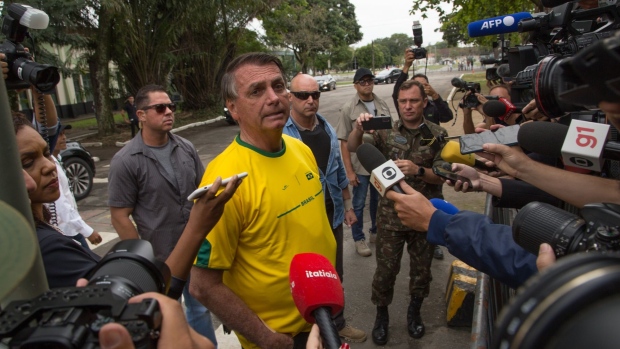 (Bloomberg) -- Jair Bolsonaro emerged from the first round of Brazil’s presidential election with an unusually soft rhetoric, touting good economic news in a sign that he has started listening to advisers and avoiding controversial topics in a bid to win over moderate voters.

The usually combative leader, who came in second in the Oct. 2 vote but with a much stronger performance than major pollsters had anticipated, has refrained from alleging voter fraud as many feared, and even acknowledged that loss of purchasing power during the pandemic probably boosted support for his leftist challenger, Luiz Inacio Lula da Silva.

As both men gear up for an election runoff on Oct. 30, Bolsonaro’s measured words are part of a strategy designed by campaign managers who for months have been trying to convince him that casting doubt on the country’s electronic ballots cost him precious votes, according to three political advisers who asked not to be named discussing internal plans.

While there’s no guarantee he won’t revert to his old self, Bolsonaro had another compelling reason to tone down his rhetoric, the advisers said: the electronic system not only gave him more votes than forecast, it also elected a large number of allies, including his own son, 14 senators and at least 188 lower house representatives.

At least for now, the president has sought to focus on a more positive agenda, boasting about a drop in fuel prices made possible by tax cuts and promising more social spending if re-elected. The advisers want him to stay on that course, delegating more controversial topics to his allies.

The president needs to focus on “all the good that is happening in Brazil in the face of tragedies such as pandemic and war,” Bia Kicis, a lawmaker who enthusiastically backs the incumbent, said in an interview.

Kicis has joined First Lady Michelle Bolsonaro and a group of women who are working to reverse the president’s rejection among female voters -- an obstacle for his re-election. As part of that strategy, he promised to pay an extra 600 real ($115.44) stipend for women enrolled in his signature Auxilio Brasil social program, if elected for a second term.

His campaign is also enlisting Economy Minister Paulo Guedes to give more publicity to recent economic achievements -- consumer prices fell for two consecutive months and annual inflation is now running at 8.7%, down from more than 12% in April. The unemployment rate has dropped to 8.9%, it’s lowest since late 2015.

It’s still to be seen whether the good economic news will be enough to sway the votes of poor Brazilians, who still contend with food prices jumping more than 13% on an annual basis.

Bolsonaro said he will also give “special attention” to the impoverished Northeast region, the country’s second biggest electorate after the Southeast. Lula, born in the northeaster state of Pernambuco, took 67% of the votes in the entire region.

But, in a sign that Bolsonaro’s newfound restraint may not last long, he said the former president had won in states where illiteracy is higher. “Do you know where those states are?,” he asked during a live broadcast on social media. “In the Northeast.”

And on Friday afternoon, the president again lost his temper while talking to reporters at the presidential palace in Brasilia, attacking Lula and Alexandre de Moraes, the Supreme Court judge who heads Brazil’s electoral court, amid shouts.

In a rush to secure endorsements before the runoff, Bolsonaro has received the support of several governors who clinched an outright victory last Sunday. Lula, who has put together a large leftist coalition and is now reaching out to more centrist parties, was backed by the third- and fourth-placed presidential contenders, as well as former President Fernando Henrique Cardoso and several former central bank chiefs and economists.

Lula or Bolsonaro: Who’s Backing Who in Brazil’s Election Runoff

Bolsonaro’s strategy is to also show he has a large coalition behind him. TV advertising expected to run later on Friday will convey that message, with a presenter saying: “If you want a government of peace and harmony for Brazil, we need a president who will work with the representatives you have chosen.”

(Updates with Bolsonaro returning to aggressive comments in 12th paragraph.)