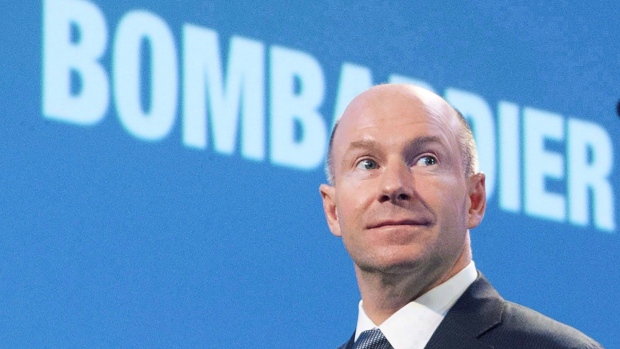 Bombardier chief executive Alain Bellemare arrives at the company's annual meeting in Montreal on May 11, 2017. , The Canadian Press

“It’s incomprehensible,’’ Bombardier Chief Executive Officer Alain Bellemare told reporters Thursday in Montreal. “We work in many countries around the world, and all countries require significant local content. We see it in the U.S. It’s difficult to understand that here, we can’t find ways of protecting innovation, technology and jobs that are similar to all the other countries in the world.’’

Via Rail on Wednesday selected Germany’s Siemens AG ahead of Montreal-based Bombardier for a $969 million order of locomotives and passenger cars. The order, which carries options for 16 additional train sets, also comes with a 15-year maintenance pact valued at $356 million.

Bombardier has been plagued by missed deadlines on a Toronto light-rail project, and was blocked last year from bidding on a New York subway-car contract because of past delays. While Via Rail said on-time delivery was a key reason for its decision to choose Siemens, Bellemare insisted his company today is fully capable of honoring its commitments.

“We’ve had a few production problems on some projects, which I began fixing in 2015, and we’re completely fixing them today in 2018,’’ he said. “So for me, this is really not a justification to decide for a C$1 billion project.’’

Recent contract wins –- such as Wednesday’s decision by New Jersey Transit to approve a railcar deal for as much as US$669 million, and Thursday’s award of a US$453 million order to the company’s Chinese joint venture -– demonstrate the strength of Bombardier’s rail unit, the CEO stressed.