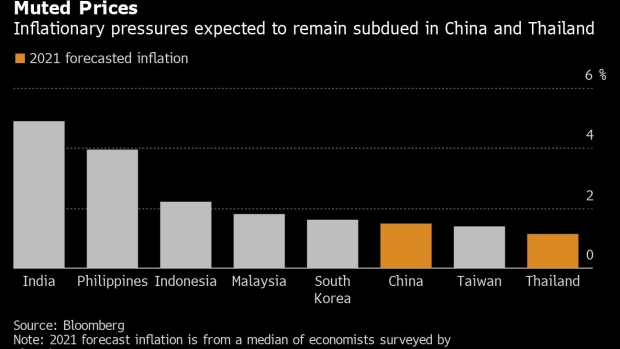 (Bloomberg) -- Just as stock investors often turn to bond-proxies in a bid to bolster their portfolios, one fixed-income fund manager is leaning toward equity-correlated securities to protect hers from the specter of inflation.

For M&G Investments Eva Sun-Wai that means exposure to Norway and Italy in her $246 million global government bond fund, as well as Asian local debt as inflation is more subdued in that region. While she sees the inflation threat as transient, she wants her fund protected from its impact in the near term.

“There is some appeal to the higher-yield developed-market curve such as Norway and Italy, where valuations are attractive and correlations to commodity and equity are higher,” she said in an interview earlier in May. In addition, “Italy has been continually supported by the European Central Bank.”

Global bond investors are trying to gauge the lifespan of the current spate of inflation as the world economy recovers from its deepest downturn in generations. A sustained period of price rises could trigger another debt selloff, while transient inflation would likely open the door for selective buying in markets.

The London-based 24 year-old -- the youngest fund manager at the firm -- has tilted her portfolio to be long inflation bets and short duration ones. Still, she acknowledges bonds are getting more attractive.

“Yields are getting cheaper and we are gradually reducing shorts, not completely bearish on duration outright,” Sun-Wai said.

The yield on 10-year Treasuries climbed to 1.77% -- its highest in over a year -- at the peak of inflation fears in March. But it has since pulled back as dip buyers emerged and investors debated the sustainability of price rises.

“I’m a bit cautious on Treasuries and the dollar as the U.S. is starting off with a large level of national debt post-Covid, and also with potential tapering on the horizon,” said Sun-Wai, who was promoted to her role in January after joining the firm in 2018 as an investment graduate.

Her fund is underweight with a short position in 30-year Treasuries, while maintaining a small long position in 5-6 year debt.

In a central bank version of a slow bicycle race, Sun-Wai is cautious about the rate hiking cycle which would favor exposure to a country’s currency over its bonds.

She suggests the Bank of England could be the one to hike first, albeit reluctantly. The Norwegian central bank could also increase rates, in the second half of this year, she added.

“I suspect a lot of central banks resent been the first mover because it will increase their cost of capital,” she said. “All of them are trying to take baby steps in terms of policy normalization.”

That makes Thailand and China local rates attractive, given that central banks in these countries remain accommodative and inflation is more anchored, according to Sun-Wai. The impact of the resurgent pandemic in Asia suggests higher commodity prices are unlikely to spark inflationary concerns that would spur policymakers into action, she said.

“Due to the virus concern, central banks should remain accommodative for now, which should be positive for the local curve, especially when U.S. rates settle down,” she said. “Asian local rates have better value than U.S. rates on a real yield basis, especially since the aggressive selloff we saw in the first quarter.”