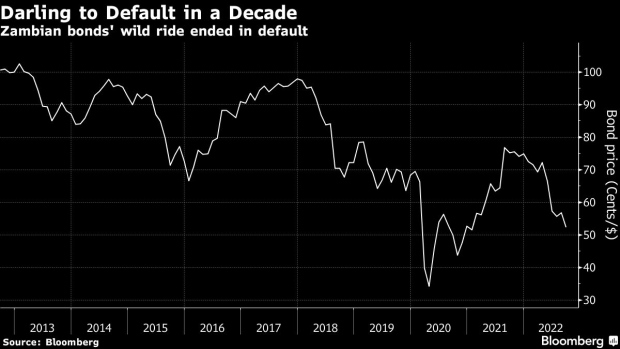 Situmbeko Musokotwane, Zambia's finance minister, following an interview at his office in Lusaka, Zambia, on Thursday, May 5, 2022. China should head the creditors committee being formed to renegotiate Zambia’s $17.3 billion of foreign debt because that will help accelerate the resolution process, Musokotwane said. , Bloomberg

(Bloomberg) -- A decade ago, Zambia’s then-Finance Minister Alexander Chikwanda bragged in his budget speech that the government’s debut dollar-bond sale attracted bids 22 times the $500 million it sought to raise. Yields were lower than those in Spain -- one of the world’s largest economies.

Now holders of that debt haven’t been paid and will be looking to the 2023 budget for clues on when they’ll get their money back, and how much.

Situmbeko Musokotwane, who has been overseeing the nation’s finances since August 2021, on Friday will present his first spending plan to lawmakers since the nation last month secured a $1.3 billion bailout from the International Monetary Fund and received assurances from official bilateral creditors that they’re willing to negotiate a debt restructuring.

Investors will scrutinize the minister’s speech for details on how he’ll start reversing a primary budget deficit of 6% of gross domestic product last year to a 3.2% surplus by 2025, as targeted under the nation’s IMF deal.

Zambia, which became Africa’s first pandemic-era sovereign defaulter in 2020, is using the Group of 20’s Common Framework restructuring template to rework its external liabilities, which grew to $17.3 billion last year. That includes the eurobond that the government sold in 2012, and went unpaid when it matured last week, as well as almost $6 billion owed to Chinese creditors.

“The principal has been agreed on the debt restructuring, now we are looking forward to the content,” President Hakainde Hichilema said in a speech at a Chinese investment forum in Zambia’s capital, Lusaka, Sept. 28. “We know that the teams are working very hard.”

Zambia needs faster progress on debt-reduction discussions with official and private sector creditors, World Bank Group President David Malpass said in a statement last week. He reiterated a call for a “deep debt reduction” of 45% in net present value terms. That may be hard to swallow for some creditors, though the price of Zambia’s 2022 eurobond -- at less than 53 cents on the dollar -- suggests investors are expecting a big haircut.

Here are other key points to watch out for in Musokotwane’s 2023 budget plan: