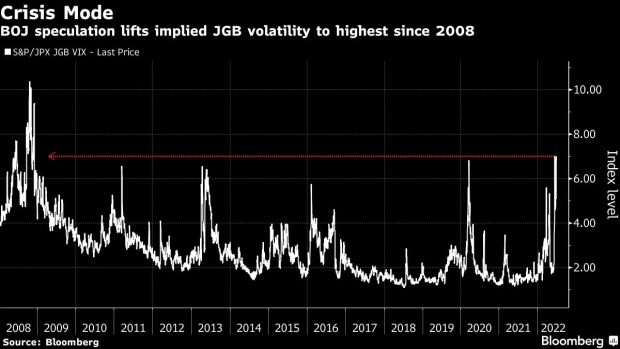 (Bloomberg) -- Things are looking up for long-suffering traders of Japanese government bonds.

After years of subdued price swings caused by central bank intervention, a key gauge of volatility in the 1 quadrillion yen ($7.4 trillion) market has surged in recent weeks to the highest level since 2008. That’s boosting demand for JGB traders, with Nomura Holdings Inc. noting signs of intensifying competition for talent.

“The industry may have become short of human resources” for handling JGB business, Yutaka Nakajima, Nomura’s head of global markets, said in an interview. Japan’s biggest brokerage is open to hiring “a few dozen” staffers, including dealers and sales people for its global fixed income operations, although it has no set target, he said.

The oftentimes sleepy market for JGBs has sprung to life this year amid speculation that rising global interest rates will force the Bank of Japan to abandon its yield-curve control policy, ending the price fluctuation limits that have historically squeezed trading opportunities.

Over the past decade, NatWest Group Plc, MUFG Bank Ltd., and UBS Group AG have quit being primary dealers for JGBs, with the Swiss lender moving its rates trading business to Sydney. Barclays Plc made cuts to its Japanese fixed income team in 2019.

Although the BOJ’s unprecedented bond purchases has led to some liquidity issues in the market, interest in futures and swaps has surged from overseas investors looking to bet on a normalization of rates. The increased volatility has “naturally” led to more customer activity, said Nomura’s Nakajima.

“For our market makers, it is good” that implied volatility for JGBs has risen because it indicates “there will be more business opportunities” for Nomura, Nakajima said.

Over at JPMorgan Chase & Co., Daiki Hayashi says his firm has been planning for years to benefit from times like these and for a future where the world’s second-largest market for sovereign bonds is more relevant.

“We’ve continued to focus on our JGB franchise for several years to capture this kind of market opportunity and already have a solid team in place to meet client demand,” said Hayashi, JPMorgan’s head of rates and FX products sales in Japan. “We expect to see a large business opportunity in JGBs with domestic and global clients for the next few years.”

Despite the renewed tailwind for bond desks, many market particpants remain fixated on the possibility of changes to BOJ policy. It’s important that bond dealers control positions to deliver a stable result “no matter what happens,” Nakajima said. Nomura is telling them to avoid holding hard-to-unwind positions as part of its risk management focus, he added. He, for one, isn’t expecting its policy settings to always be the status quo.

“It is not going to be the same forever,” he said.