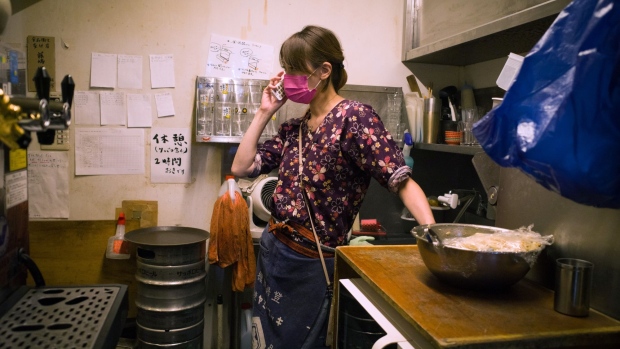 Bars and restaurants in Shinjuku during Tokyo's third state of emergency in April. , Bloomberg

(Bloomberg) -- With Japan’s fourth state of emergency extended yet again, growing numbers of the bars and restaurants that have borne the brunt of curfews say they can no longer afford to comply. Some are simply fed up.

“I feel the government is bullying us,” says one Tokyo pub owner, Yuka Fujishima, who’s chosen to defy the rules. “I just couldn’t take it anymore.”

Public health experts have pinpointed watering holes like Fujishima’s in Tokyo’s Shimbashi neighborhood as potential hotbeds of infection, leading to the emergency restrictions that ban them from serving alcohol and set 8 p.m. as closing time.

A widening rebellion among business owners against the measures reflects the exasperation of many Japanese whose anger over the government’s handling of the pandemic last week drove Prime Minister Yoshihide Suga to announce his resignation.

On Thursday, the outgoing premier extended the emergency in Tokyo and large parts of the country to the end of the month, while acknowledging the need to return to something like normal life. For the first time, he opened the door to using vaccination certificates as a way to eventually ease restrictions, though the move would come too late for businesses that have already gone under.

Suga’s successor will need to refine the country’s strategy for moving past the pandemic and getting the economy back on a firmer footing. After a slow start, Japan is catching up with countries like the U.S. and the U.K. in terms of vaccination rates, but it’s still relying heavily on business restrictions that have few legal teeth to contain the virus.

Those measures are losing effectiveness the longer they drag on.

On a recent Thursday night, some neon-lit side streets in the downtown district of Shinjuku were so crowded with drinkers that it was easy to forget a curfew was in effect.  “We Are Open Until 1 a.m.,” proclaimed a hand-drawn sign outside one pub.

The owner of another bar nearby, who wouldn’t give his name for fear of retribution from the government, said he had to serve alcohol or risk going out of business.

Shop owners who object to the restrictions cite the fact that Japan’s daily death toll from Covid-19 is still a tiny fraction of that in the U.S. and many parts of Europe, where businesses are no longer asked to rein in their activity.

If more effort were put into adding hospital capacity, they argue, Japan’s medical system might be able to cope with more patients. And even though Tokyo is paying businesses as much as $1,800 per day to cooperate with the curfews, the money often doesn’t make up for lost sales, they say.

Bars and eateries account for about 17% of Japan’s Covid-related bankruptcies, the most among any industry group, according to research firm Teikoku Databank Ltd. The figures don’t include cases where businesses have simply chosen to call it quits or have had to make the difficult decision to shut one or more outlets, like Fujishima did in July.

Patience has worn thinner over time.

In January, when Japan called its second state of emergency, the few proprietors who chose to flout the rules did it mostly on the sly. One exception was the publicly traded restaurant chain Global-Dining Inc., which issued a statement saying it would continue with business as usual. In March, the company filed a lawsuit against the city.

By August, more than 5,300 of Tokyo’s bars and restaurants were openly defying the government, about 4% of the total surveyed and double the proportion from a few months earlier, according to the city’s own studies.

Jeff Kingston, director of Asian Studies at Temple University in Tokyo and a longtime city resident, said the official estimates were probably a significant undercount of the number of places serving alcohol.

“It’s a lot easier to find than one would have anticipated -- not that I’m confessing to anything,” he said. “Normally we think of the Japanese as following the rules and being deferential to authority, but businesses have their backs against the wall and customers want to drink.”

Economist Masamichi Adachi at UBS Securities says the mushrooming of disobedience reminds him of the Broken Window Theory of policing. Once there’s a critical mass of rule-breakers, others start to follow.

“The state of emergency doesn’t feel like an emergency anymore,” he said.