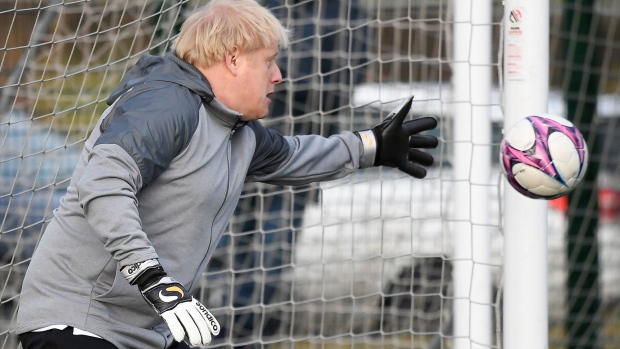 (Bloomberg Opinion) -- In late March, Boris Johnson and Matt Hancock, Britain’s portly prime minister and its slender health secretary, both contracted Covid-19. Hancock had a mild case and was back to work a week later. Johnson was lucky to come out alive after a spell in intensive care.

Ever since then he has been on a mission. Johnson believes that being overweight was a factor in his contracting a more severe form of the disease, and a growing body of evidence backs that up. In a study of 17,000 Covid-positive hospital patients, those with a body mass index of more than 30 (considered obese) had a 33% greater risk of dying than non-obese patients. A separate study of people in U.K. intensive care units for the condition found that 73% were either overweight, obese or morbidly obese.

The British prime minister once burnished his libertarian credentials by decrying sin taxes on producers of unhealthy snacks and sugary drinks, but the coronavirus has changed him. The food industry should prepare itself for the consequences.

The same connection between weight and Covid-19 has been borne out in other countries. In France, a study of people admitted to intensive care units at Lyon University Hospital, published in the Lancet, found 25% of severe cases were obese. Researchers at New York University had similar findings.

Scientists are still trying to understand the connection better, but obesity seems to be a risk on various levels. Being significantly overweight puts greater strain on the heart and lungs, which makes fighting the virus more difficult. The infection enters the body through the enzyme ACE2, higher levels of which are found in adipose, or fatty, tissue (which obese people have more of).

The immune response in very overweight patients also seems to be compromised, due to the way a particular type of immune cell, called macrophages, invade the fat tissue and can send the body’s immune system into self-destructive overdrive. Hospital care may also be complicated by a person’s size and any underlying, but as yet undiscovered, health issues.

The Covid-obesity link was observed in China too, but it’s a bigger worry in Britain and the U.S., where many people are overweight. Nearly 40% of American adults under 60 have a body mass index over 30. Nearly two-thirds of U.K. adults are overweight or obese, according to the National Health Service. Obesity is prevalent in 29% of adults and one in five children aged between 10 and 11.

Critically, many of the recent Covid-19 flare-ups are in more deprived areas, and obesity rates are higher there. In Britain, the most obese country in Europe (apart from Malta), obesity is twice as high in the poorest areas as the richest ones. In the U.S., obesity has been linked to levels of income and education, and to ethnicity.

The question is what to do about that. Given the complexity of environmental, biological and psychological factors, weight isn’t an easy policy area. The vast majority of those who manage to lose a lot of weight find they gain back most of it. Researchers have made progress in understanding why that’s so, and the way calorie-reduction regimens trigger countervailing increases in appetite that ultimately defeat even the most determined dieters.

Cultural stereotypes and stigmas haven’t quite caught up with the research. If you scroll down the comments of any social media feed on the obesity debate you’ll find typical rejoinders with some combination of the words willpower, diet, exercise or portion control. There are accusatory glances at parents who don’t monitor the weight of their children.

Johnson has certainly played with those stereotypes. When he was its editor, the conservative Spectator magazine ran an article warning people not to hire a “fatty” for a nanny, suggesting they were likely to be unclean, lazy and derelict in their childcare duties. Even for a magazine that prides itself on being contrarian, the piece was unscientific and grotesque.

In a 2004 newspaper column, Johnson said it was people’s “own fat fault” if they were obese, a view he described last week as embarrassing. In his Tory leadership campaign, he vowed to end the “continuing creep of the nanny state” and roll back sin taxes. Now, however, he is weighing in on the side of the interventionists, distancing himself from his old views. The government hasn’t specified how it will act, but it is considering a range of more aggressive measures.

One is likely to be expanding the U.K.’s sugar tax. While Britain has a limited levy on soft drinks, which seems to be having an impact, there are too many exemptions.

Even an expanded sugar tax is only part of the solution, as Sally Davies, the country’s former chief medical officer, has argued. Education is needed for younger children, especially those from disadvantaged backgrounds who are more likely to eat packaged and processed foods — and Brits also need protection from the fire hose of junk-food advertising. So far, that’s been a very uneven fight. A report from the Obesity Health Alliance a few years ago noted that the government had spent 5.2 million pounds a year on its healthy-eating campaign, while confectioners and purveyors of junk food spent 143 million pounds on ads.

New interventions would no doubt be greeted with angry howls from the food industry. But some of the old arguments against taking action — especially that sin taxes don’t work or affect the poor disproportionately — no longer hold up. Johnson’s backing for action adds political weight, and muscle, to the other side.