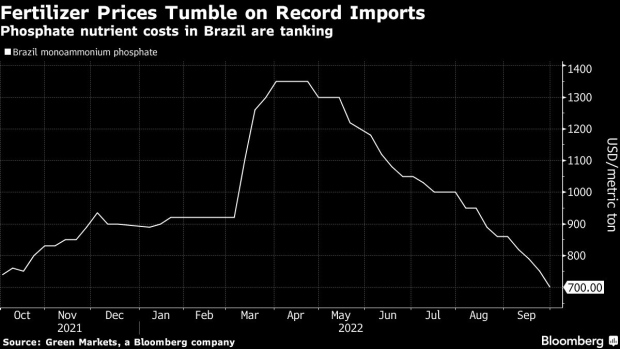 Fertilizer stored in a warehouse at a farm near Brasilia. Photographer: Andressa Anholete/Bloomberg , Bloomberg

(Bloomberg) -- Fertilizer firms are starting to see farmers in one of the world’s biggest food suppliers pushing back on high prices for crop nutrients.

Brazil has so much fertilizer that shipments are getting turned away. Case in point: Swiss-based fertilizer producer Ameropa AG diverted a shipment of 17,416 metric tons of monoammonium phosphate -- commonly known as MAP -- to the US last month due to Brazil’s full silos and dwindling demand for chemicals from farms.

The vessel, Amalea, arrived at Brazil’s Paranagua port on Sept. 13 and sailed nine days later after Ameropa applied for an export license to send the shipment to New Orleans, a major US fertilizer hub. The company didn’t respond to a request for comment.

The move marks a turnaround for a country that imported a record amount of fertilizers this year. Fertilizer companies took an unprecedented amount of orders to ensure Brazilian farmers would have enough crop inputs to expand their planted areas as grains prices soared and Russia’s invasion of Ukraine threatened to disrupt global supplies.

Brazilian farmers, who faced soaring prices for crop inputs earlier this year, are planning to cut back on fertilizer, reducing demand when supplies are ample. Such circumstances have caused fertilizer prices in the South American country to plunge.

“With prices at record levels, farmers decided to reduce applications to protect their margins,” Marina Cavalcante, an analyst at Bloomberg’s Green Markets said. Farmers are able to skip application of phosphate fertilizers without compromising yields since the soil can retain this nutrient for more than a year, she said.