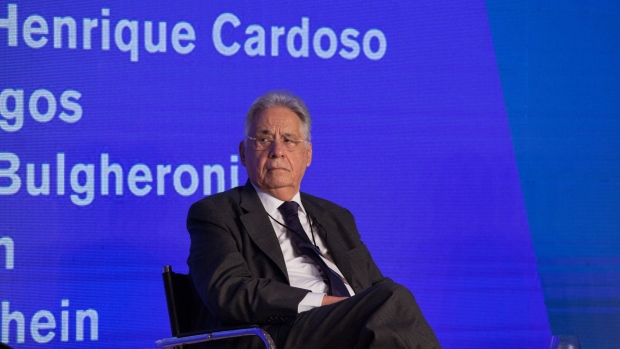 Fernando Henrique Cardoso, former president of Brazil, listens during the Montevideo Circle Foundation Summit in Buenos Aires, Argentina, on Thursday, May 11, 2017. The summit brings together former Latin American presidents with businessmen, and academics working for democracy and the improvement of international relations. , Bloomberg

(Bloomberg) -- Former President Fernando Henrique Cardoso called on Brazilians to vote for a candidate who’s committed to strengthening the country’s institutions and preserving the environment, a not-so-veiled rebuke to incumbent Jair Bolsonaro just 10 days ahead of general elections.

Without citing the president or his leftist challenger Luiz Inacio Lula da Silva, Cardoso said on Thursday that Brazil’s next leader should be someone who will fight poverty and inequality while supporting equal rights for all, independently of race, gender or sexual orientation.

“I ask people to vote for those who value education and science and who are committed to preserving the environment, strengthening the institutions that ensure our freedom, and reestablishing Brazil’s historic role in the international scenario,” he 91-year-old former president wrote in a statement published on social media.

In an interview with Valor Economico last year, Cardoso said he could support Lula if that were the best way to defeat Bolsonaro. He hasn’t publicly endorsed the leftist leader, however, as his Brazilian Social Democracy Party is officially supporting the candidacy of Simone Tebet, who places fourth in opinion polls.

Members of Lula’s campaign, particularly his running mate Geraldo Alckmin, a friend of Cardoso, were trying to get his endorsement in the final stretch of the race. On Monday, eight former presidential candidates, including ex-Central Bank President Henrique Meirelles and ex-Environment Minister Marina Silva, declared their vote for the leftist leader.