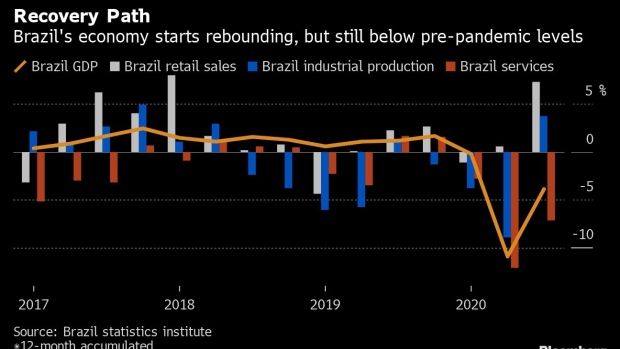 (Bloomberg) -- Brazil’s economic growth fell short of market expectations in the third quarter, and that was largely before a new jump in Covid-19 cases and a reduction in emergency aid started to pour cold water on the recovery.

President Jair Bolsonaro this week signaled his government plans to halt the centerpiece of its stimulus spending -- monthly stipends to informal workers -- amid concerns about rising public debt. The timing couldn’t be worse for an economy that’s facing renewed restrictions on commerce, as officials in states such as Sao Paulo and Parana tighten quarantines to battle an increase in virus infections.

Latin America’s largest economy surged 7.7% from the previous quarter, the most in government data going back to 1996, but still less than the 8.7% expected by analysts. The figure captures the impact of unprecedented emergency spending that set Brazil apart from its peers. Now, as officials grapple with how to pay for that stimulus with the virus again on the rise, their options for supporting a still-uneven recovery are more limited.

“The main risk to the Brazilian economy’s recovery is a second coronavirus wave,” said Priscila Deliberalli, an economist at Banco Safra. “The impulse from this year’s government spending was colossal, and it’s obvious that the public spending rules will represent a drag going forward.”

The virus spread coupled with the end of stipends represent the worst combination for Rubinarht Almeida, a 42-year-old construction worker from the outskirts of Brasilia. The monthly payments have helped Almeida get by after he lost his job during the pandemic, just as he returned to work after undergoing heart surgery at the beginning of the year. He’s now seeking an occupation as doorman of commercial buildings.

“I have been sending my resume around and have found some openings,” he said. “But I’m very concerned about going back to work because I’m vulnerable to the disease.”

Third-quarter growth was led by industry, which jumped by 14.8% from the April-June period. Investments surged by 11% and family consumption rose by 7.6%, while agriculture slipped by 0.5%.

“Family consumption was the main area of disappointment,” said Andre Perfeito, chief economist at Necton Investimentos. “Given that the economy should be weaker than expected, it should reduce the pressure for interest rate increases.”

For the whole year, Brazil’s gross domestic product is expected to shrink by 4.8%, less than regional peers including Argentina, Chile, Mexico and Colombia, according to analysts in a Bloomberg survey. The same survey shows Brazil’s economy growing by 3.5% in 2021.

Following the release of third-quarter GDP data, the economy ministry said activity is strong enough to withstand the removal of emergency aid next year. The government has already cut the payouts by half in September and expects to discontinue them this month.

The ministry’s stance provides relief to investors who clamor for a quick return to fiscal austerity as public debt nears 100% of GDP. Yet families and companies are on alert for rougher times ahead, with unemployment reaching a record 14.6% in September.

“The question now is about the strength of family consumption with the removal of emergency aid amid a weak labor market,” said Camila Abdelmalack, chief economist at Veedha Investimentos. “Food inflation is eroding family income and limiting consumption to the very basic.”

(Recasts story with more comments from economists and details)