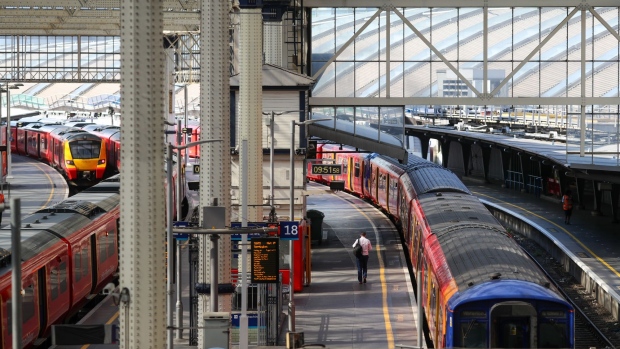 Railway trains, operated by South Western Railways run by the FirstGroup Plc and MTR Corp. Ltd. franchise, sit at platforms at London Waterloo railway station in London, U.K., on Thursday, May 21, 2020. The government in London is trying to reboot the economy while also extending a stay-at-home pay program. , Bloomberg

(Bloomberg) -- British commuter train operator South Western Railway faces a strike ballot by members of the Transport Salaried Staffs’ Association in the latest escalation of disputes over pay and jobs across the UK network.

TSSA will ballot hundreds of staff on walkouts after SWR said it had no mandate from the Department for Transport to make an offer addressing the union’s concerns, according to a statement from the labor group Thursday.

Those include a guarantee of no compulsory redundancies this year, no unilateral changes to working conditions, and a pay increase reflecting the rising cost of living, TSSA said.

SWR, which is owned by  FirstGroup Plc and MTR Corp., provides services to London Waterloo from commuter towns and cities west of the capital including Guildford, Reading, Southampton, Portsmouth and Bournemouth.