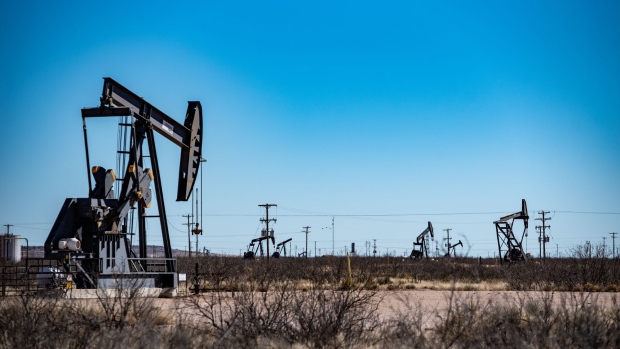 Oil pumpjacks outside Odessa, Texas, U.S. on Saturday, Jan. 19, 2019. Darden lost control of the ranch after bankruptcy court ordered the ranch be sold. The ranch has many natural springs with a potential reserve of water underground. Darden is hoping that despite losing the ranch, he may be able to develop a water business to supply local oil companies with clean fresh water. Sergio Flores/Bloomberg Photographer: Sergio Flores/Bloomberg , Bloomberg

At least four brokerages are restricting the ability of clients to enter into new trades in the most active oil benchmarks in a bid to curb losses after an unprecedented meltdown in crude this week dragged prices into negative territory for the first time in history.

The limit for these trades comes at a time when financial firms are trying to help clients reduce risk after the spread of the coronavirus has hobbled economies around the world, causing tremendous volatility in oil prices. Front month oil futures in New York crashed on Monday, falling by more than US$55 a barrel and then came roaring back on Tuesday, settling up by more than US$47 from Monday’s close.

While restricting just a handful of traders from buying and selling in the front of the curve may not be significant to the market, it comes as passive investors and index providers are also pushing their holdings further into the curve to mitigate the wild swings.

“When you think about some of these firms, their customers were probably not trading for size. But when you take on an aggregate amount of these folks, it adds up and you definitely lose some liquidity in the front,” said Bob Yawger, director of the futures division for Mizuho Securities USA LLC, adding that the moves likely helped take some speculative shorts out of the market.

The futures division of brokerage INTL FCStone Financial Inc. told clients with accounts totaling less than US$5 million that they should not place any new trades in Nymex West Texas Intermediate and ICE Brent crude contracts for June delivery, effective Wednesday, according to a memo obtained by Bloomberg.

“The reason for taking this action is for the best interest of our customers during these very unprecedented market conditions,” according to the memo.

The firm is also actively reviewing limits for clients who have more than US$5 million and may adjust accordingly.

“Given the extreme and unpredictable volatility in the markets, we are taking action to protect our smaller clients and make sure they are aware of the risks they are assuming,” a company spokesman said via email.

Marex Spectron is also restricting customers from taking new positions in the same contracts, the company confirmed. Meanwhile, Chicago-based AMP Global Clearing said in a note on its website that “due to certain anomalies” affecting the front month futures for crude oil and mini-crude, any positions -- both long and short -- are subject to liquidation.

TradeStation Securities Inc. added new measures on Monday to limit customer exposure in the front month as a precautionary measure, Chief Operating Officer Peter Korotkiy said by phone. That means clients can close a position but cannot add to it, a rule they will reevaluate next week. Earlier this week, Greenwich, Conn.-based Interactive Brokers Group Inc. said that several of its customers held long positions in oil, resulting in losses of some US$88 million.

Investors have raised fears for months that crude storage filling to the brim would be disastrous for prices, as supply dwarfs demand. Those concerns came into full force on Monday when U.S. oil futures for May delivery tumbled below zero, settling at minus US$37.63 a barrel. The May contract expired on Tuesday, with the most active contracts now for June delivery.

Investors fear that what happened in May could repeat itself in June. WTI June prices traded up US$2.72, or 20 per cent, to settle at US$16.50 a barrel on Thursday.