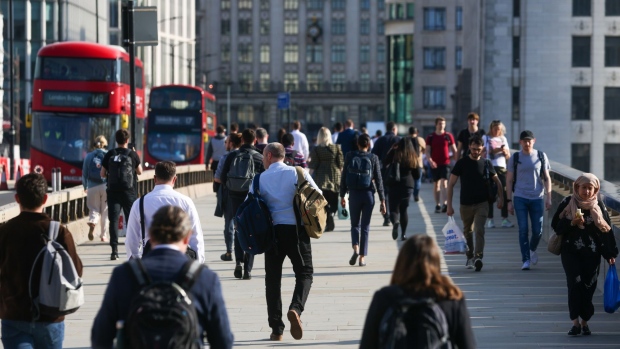 Commuters walk across London Bridge in London, U.K., on Monday, June 7, 2021. Flexible office firm IWG Plc warned that the prolonged impact from the pandemic was delaying its recovery and that 2021 earnings would be “well below” last year's. Photographer: Chris Ratcliffe/Bloomberg , Bloomberg

(Bloomberg) -- The pandemic has created a once-in-a-generation buying opportunity for investors willing to bet on the long-term prospects of workers returning to the hearts of global cities.

That’s the view of real estate titans including Tishman Speyer Properties President Rob Speyer and Brookfield Asset Management Inc. Chief Executive Officer Bruce Flatt, who have invested billions snapping up discounted offices and other commercial buildings since the start of the pandemic.

“There are extraordinary opportunistic things to buy in major cities around the world,” Speyer said during a panel at the Qatar Economic Forum Wednesday. “We have been active during Covid in Paris, in Washington D.C., in San Francisco, in London and people are just selling off real estate at 25%, 30%, 40% discounts.”

Even as others fret about the future demand for workspace, Tishman has spent about $12 billion since March last year on deals it expects “to be some of the best investments we have ever made,” Speyer said. “If you have a long-term view of things reverting anywhere near where they were pre-Covid, these are generational buying opportunities.”

The sudden shift to home working and online shopping has spooked some investors, triggering a collapse in the value of publicly traded landlords and halting work on new developments. But with vaccine rollouts allowing the world’s financial capitals to gradually re-open, more veteran developers are betting on a future space shortage that, together with low interest rates, will support rising rents and values.

“The true value investments where big money can be put to work and where significant value can be made is buying in these great cities where people have a different and more pessimistic view of them,” Flatt said on the panel moderated by Bloomberg Television anchor Carol Massar.

Once the debate about the future of the office dies down “people are going to realize these are among the great investments in the world to own,” he added.