Brookfield Asset Management Inc. plans to launch its own private real estate investment trust after taking over the management of a portfolio of properties currently overseen by subsidiary Oaktree Capital Management.

The Canadian alternative asset manager is making the move to enhance the scale of the company, leveraging Brookfield’s track record as an owner and operator of real estate, according to people familiar with the strategy. The plan is to expand the portfolio over time to compete with rival REITs managed by Blackstone Group Inc. and Starwood Capital Group, they added.

Oaktree REIT has US$478 million in total assets, including residential properties in Atlanta, Denver and Dallas and office buildings in Los Angeles and Arlington, Virginia, according to its website. The fund has returned 10.3 per cent annually since its inception in December 2019. 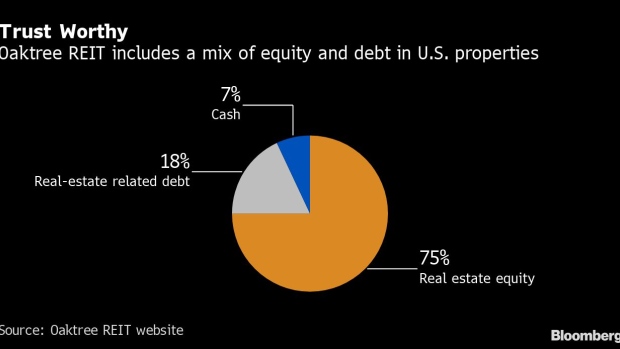 Brookfield will contribute its interest in three multifamily and office properties to the venture valued at more than US$400 million, the people said. The strategy will remain largely the same but will include some non-U.S. markets where Brookfield has operations.

The transition is expected to occur in the fourth quarter. Units in the new REIT will be distributed by Brookfield-Oaktree Wealth Solutions to individual and high-net-worth investors.

Private real estate investments are viewed by some investors as more attractive than public ones because they can be less volatile and often generate better long-term returns. In a separate transaction, Brookfield Asset is in the process of trying to take private New York-based Brookfield Property Partners LP.

Brookfield’s move with the Oaktree assets comes amid a push into the private REIT space by some of its private equity competitors.

KKR & Co. launched its KKR Real Estate Select Trust Inc. in May with US$150 million from its own balance sheet, while Starwood’s private REIT has about US$7.8 billion in total assets, according to its website.

Blackstone’s own private REIT, or Blackstone Real Estate Income Trust Inc., had US$48.4 billion in total assets at the end of May. BREIT, which launched in 2017, invests mostly in fully leased apartment and industrial properties. It said on Wednesday that it had reached an agreement to acquire American International Group Inc.’s interest in an affordable housing portfolio for about US$5.1 billion.

While the initial salvo is relatively modest, Brookfield Asset -- with US$609 billion under management as of March 31 -- has in the past demonstrated an ability to scale up its operations in new markets and with new funds.

In real estate, for example, the initial Brookfield Strategic Real Estate Partners fund raised US$4.4 billion in 2013. The fourth iteration is currently seeking to raise US$17 billion, according to people familiar with the matter.