Buffett bets big on his own firm with huge buyback

Warren Buffett is betting on brighter prospects for his Berkshire Hathaway Inc.

Berkshire spent a record US$5.1 billion buying back its own stock in the second quarter, and may have kept that higher pace going in July. The billionaire investor sought to seize on a bigger discount to the S&P 500 during a quarter when the conglomerate’s operating businesses held up better than expected.

Buffett said in early May that he was keeping cash high to be prepared for any direction the pandemic might turn and wasn’t overly attracted to buybacks. But as he searched for undervalued assets to spend billions on, he gravitated to his own firm’s shares.

“Even though we don’t know how long it’s going to be and how much it’s going to permanently affect people’s behaviour, we think Berkshire Hathaway is in a really good position to survive,” said Bill Smead, chief investment officer at Smead Capital Management, which oversees $1.5 billion including Berkshire shares.

Edward Jones analyst Jim Shanahan estimated that Berkshire repurchased about US$2.4 billion more of its stock in July.

The 10 per cent drop in operating profit wasn’t nearly as precipitous as the 27 per cent decline expected by analysts at Keefe, Bruyette & Woods, and results were better than a forecast from Shanahan. Earnings generated by Berkshire’s businesses topped US$5 billion for the ninth time in the last 10 quarters.

Buffett piled into his firm’s stock as Class A shares fell 1.7 per cent and Class B shares were down 2.4 per cent in the second quarter. He wasn’t as bullish on broader equities as the S&P 500 rallied 20 per cent. Berkshire had its biggest net sales of stocks in more than a decade.

Along with the buybacks, purchases of Bank of America Corp. stock in recent weeks as well as a July deal for natural-gas assets signal that Buffett isn’t just waiting on the sidelines anymore. He’s picking his spots: Bank of America is a longtime Berkshire investment and Buffett’s firm is very active in the energy sector.

“All of those are really things he’s comfortable with,” said Paul Lountzis, who oversees investments including Berkshire shares as president of Lountzis Asset Management. “I don’t think he’s stepping out of his comfort zone. He’s still trying to be very careful and very conservative.” 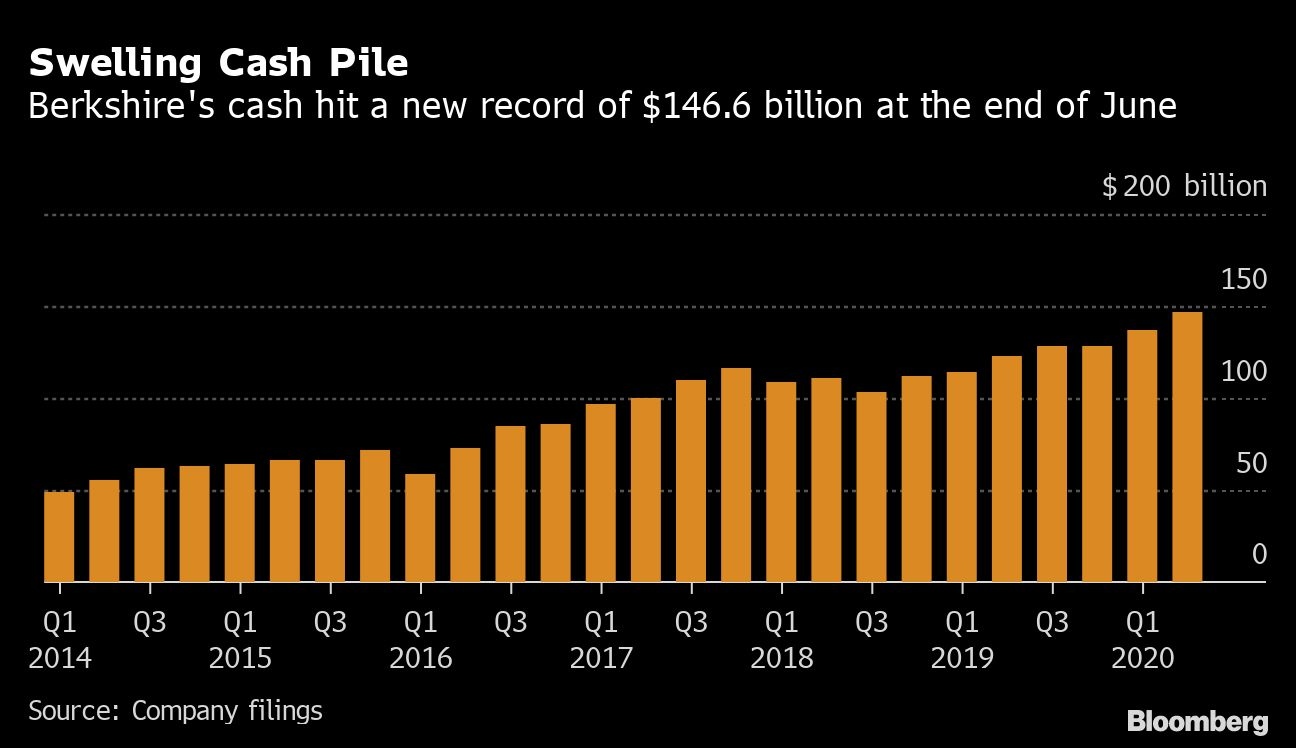 And with a record US$146.6 billion of cash on hand at the end of June, Berkshire said the company could weather the pandemic’s effects.

“Our operating business groups are preparing for reduced cash flows from reduced revenues and economic activity as a result of COVID-19,” Berkshire said Saturday in a regulatory filing. “We currently believe our liquidity and capital strength, which is extremely strong, to be more than adequate.”

Here’s some other takeaways from Berkshire’s second-quarter earnings:

Berkshire sold almost $13 billion in stocks, on a net basis, in the quarter. That included Buffett’s decision to dump airline stakes, which was announced at his annual meeting in May. Another chunk of the divestments appears to come from Berkshire’s bets on financials. Berkshire and other investment companies are expected to report their 13F holdings by Aug. 14. 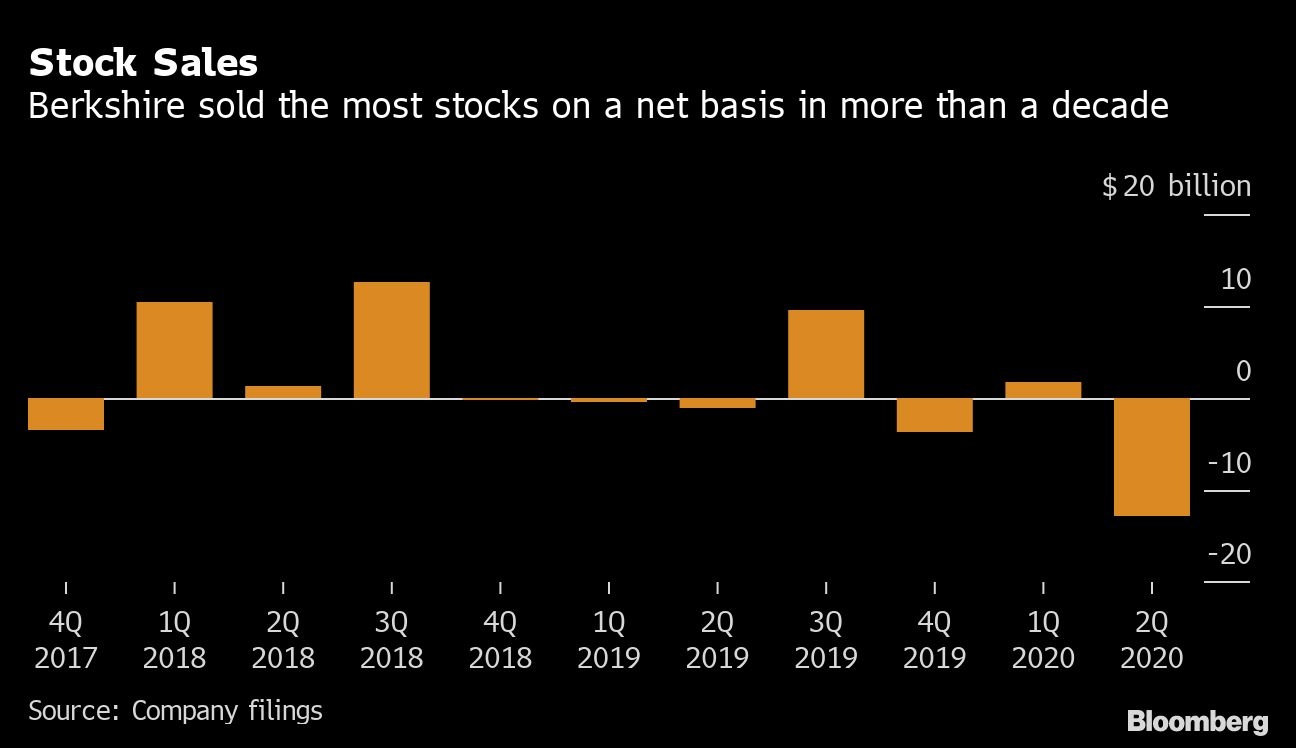 Berkshire continued to feel the pain of the airline industry upheaval, even after dumping its stock holdings in four of the major U.S. airlines. Buffett’s company booked a US$10 billion impairment charge tied to its Precision Castparts business in the second quarter, and warned that it might take a vaccine to get that market back to more normal levels.

Operating profit slumped 10 per cent, hit by lower earnings from the railroad BNSF and from Berkshire’s collection of manufacturing, service and retailing businesses.

The pandemic weighed on units ranging from Precision Castparts to the footwear and apparel businesses. Berkshire warned that the effects on most operations were “relatively minor to severe” and cautioned that it’s hard to predict when the environment will normalize or how this will alter consumer behavior going forward.

BNSF reported reduced revenues across the variety of goods it carries on its rails, including agricultural products, consumer items, industrial cargo and coal, but the business was able to eke out more cost savings in the quarter.

Net earnings surged nearly 87 per cent in the second quarter, driven by swings in Berkshire’s US$207 billion stock portfolio. Unrealized gains in the stock holdings accounted for a US$34.5 billion gain.

Berkshire’s Apple Inc. stake, its largest common stock bet, ended the quarter at US$91.5 billion, meaning it accounted for about 44 per cent of the company’s stock portfolio.