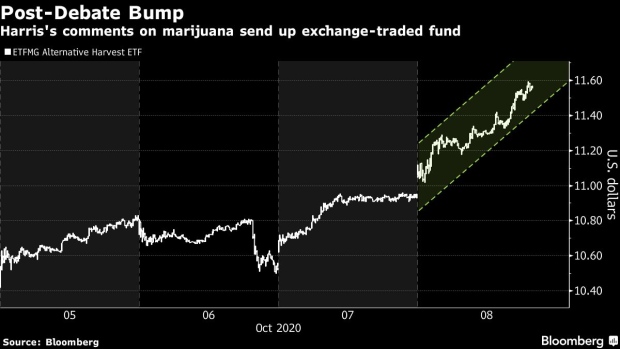 (Bloomberg) -- How many brands of soft drinks can you name off the top of your head?

Nearly everyone can come up with Coke and Pepsi, but go further down the list and it quickly diverges, based on regional breakdowns and local loyalties. That’s what the nascent cannabis industry is dealing with, too. Cannabis firms that want to dominate the sector are facing a rule of numbers -- there’s only room for a few big names in any category, and breaking into American households with name recognition is a monumental task.

In the CBD industry, products can at least sell across state lines, so becoming the “Oreo” or “Tylenol” of CBD is within reach for the most successful players. But for companies pitching products that contain THC, the psychoactive ingredient in marijuana, brand-building gets tricker. Because regulations vary by state, crucial brand-building elements like formatting and packaging can be different everywhere you sell.

Columbia Care Inc., a specialist in medical cannabis that has dispensaries across multiple states, ran into those issues as it prepared last week’s launch of “Seed & Strain,” which it’s pitching as a “national lifestyle brand” to appeal to recreational users. Chief Growth Officer Jesse Channon said in an interview that the company is aiming for a consistent flavor and experience that will give the name cachet among connoisseurs.

But that’s a challenge when you can’t ship across state lines and need to grow marijuana specifically for each state that you sell in. Quirks like Florida’s requirement that flower come in a white jar are another obstacle, Channon said.

As a result, Seed & Strain will come in white jars in that state, but black or amber jars in other markets. That would be kind of like if Coca-Cola Classic came in a blue can in some states and the iconic red in others. But that doesn’t worry Channon. If anything, it shows just how creative cannabis companies are thinking as they shake up business norms in their unique quest to get ahead of the big pharma and packaged-goods companies expected to hone in on the sector once it’s fully legal.

“I grew up in Atlanta and drank Coke from all over the word,” Channon said. “And later I realized it tasted different in Germany than in the U.S. But when you travel the world, McDonald’s fries always taste like McDonald’s fries. We’re dealing with the former situation -- it may be we just have to have a different flavor profile in different states.”

“We will decriminalize marijuana and we will expunge the records of those who have been convicted of marijuana,” said Senator Kamala Harris, at the vice presidential debate.