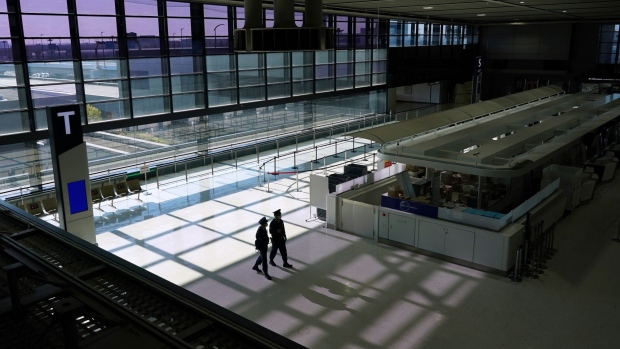 Police officers patrol an empty check-in area in a departure hall at Narita Airport in Narita, Chiba Prefecture, Japan, on Tuesday, Nov. 30, 2021. Japan closed its borders to new foreign arrivals from Tuesday and have its own citizens isolate on arrival from countries where the omicron variant has been found, while experts around the world analyze the risks it presents. , Bloomberg

(Bloomberg) -- Japan’s decision to close its borders to newly arriving foreigners in an attempt to head off the omicron coronavirus variant has met with support from members of the business community, despite their earlier urging for Japan to reopen to the world.

“Making this call is appropriate,” said the lead editorial on Tuesday in the Nikkei, the paper of choice for business leaders. Just weeks earlier, before the discovery of the latest variant, the Nikkei had called for Japan to relax its border policy, saying Japanese businesspeople were being left out of international negotiations and the country’s labor shortage could worsen.

Masatoshi Kumagai, the founder and chief executive officer of GMO Internet Inc., was among the business leaders who welcomed the move, which came a day before Japan discovered the first case of the omicron variant within its borders.

“Prime Minister Kishida, you’ve made a wise decision,” he wrote on Twitter, hailing the swift action by Fumio Kishida, who has led the country since early October.

The plaudits stand in contrast to the previous position of business lobby Keidanren, which in September called on Japan’s leaders to loosen border controls that have made it extremely difficult for businesses to import much-needed workers. Japan had begun to relax its rules only three weeks ago to admit students and businesspeople, while still banning tourists.

Japanese markets have been extremely sensitive to news of the virus. The Topix erased gains and dropped for a third day in a row on Tuesday following comments from Moderna Inc.’s top executives that reiterated omicron might require new vaccines. Japan currently has some of the lowest daily Covid cases among major countries, outside of Zero Covid-pursuing nations such as China.

Kishida’s reaction may reflect the tribulations of his immediate predecessor Yoshihide Suga, who was frequently criticized during his one-year term in power for moving too slowly to control the virus. A Mainichi poll in January found that 71% believed his declaration of a state of emergency had been too slow, as the nation grappled with a wave then fueled by spread of the alpha variant.