Business sentiment in Canada near record

Business sentiment rose to near record levels at the start of 2021 on an improving outlook for both domestic and foreign demand, according to the Bank of Canada.

The results its latest quarterly survey of executives show business conditions continuing to improve, with many firms no longer worried about pandemic uncertainty. Managers reported stronger sales outlooks, investment intentions and accelerating inflation expectations, though they indicated capacity constraints were slightly weaker at about historical averages. The central bank also highlighted, as it has been doing throughout the recovery, the unevenness of the rebound. 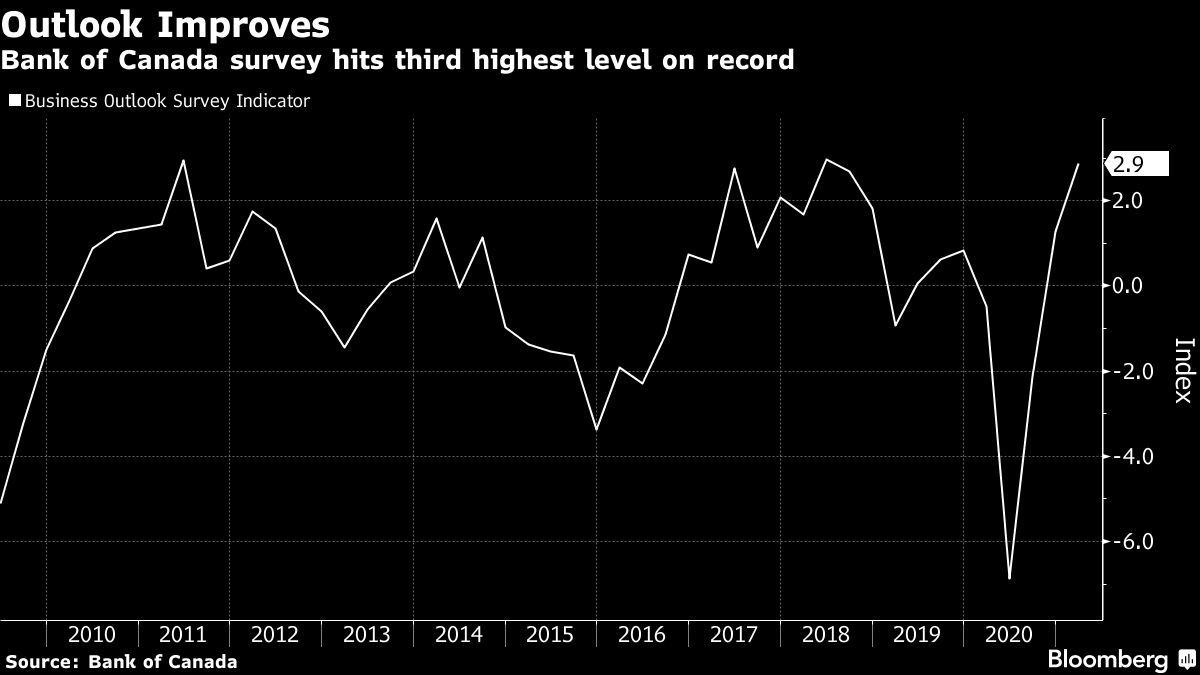 The Bank of Canada’s composite gauge of sentiment rose to 2.9 in the first quarter, the highest since 2018 and the third highest score in data going back to 2003. That’s up from 1.3 in the fourth quarter and a decade-low of -6.9 at the height of the pandemic last year. The indicator hit a record of 3.0 in the second quarter of 2018.

“Firms reported less uncertainty related to the Covid‑19 pandemic and strengthening demand from weak levels,” the central bank said in its summary of the findings. “Still, the recovery remains uneven, with firms tied to high-contact services facing ongoing challenges.”

The results of the survey will only fuel expectations the Bank of Canada will start tightening its aggressive monetary policy stance as early as its April 21 policy decision, when it could begin slowing the pace of its government bond purchases. Separately, the central bank issued its quarterly survey of consumers that also found spending expectations at a record.

The interviews in the Bank of Canada business outlook survey were conducted from mid-February to early March, before new economy-wide restrictions were imposed amid a third wave of Covid-19 cases. The data, though, do show signs businesses are adapting to containment measures, including a greater capacity for online sales, according to the central bank.