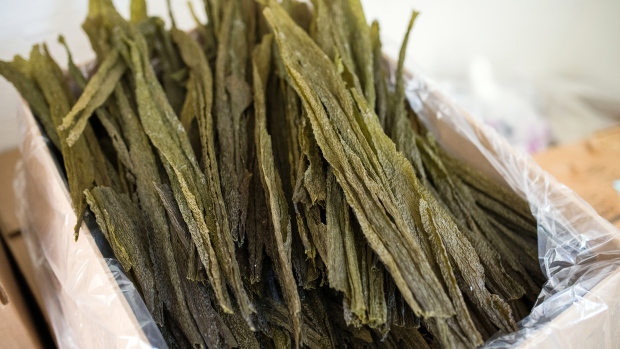 It’s rare to get good news from the sea. Water ­temperatures are rising, fish stocks are being depleted, and the fish we do eat are increasingly full of microplastics. But the oceans do hold one positive portent: Seaweed. It’s ­regenerative — it can grow about a foot a day — and carbon and nitrogen sequestering. Research suggests that, per acre, it can absorb more than 20 times as much carbon dioxide as a forest. In the U.S. and Canada, entrepreneurs are cultivating it and other macro algae for everything from kelp jerky to capsules containing shots of Glenlivet.

These companies have ambitious plans to grow in 2020, taking up more and more space on shelves and cleaning up more and more oceans. “We are eyes on the blue green economy,” says Chelsea Briganti, chief executive officer of utensil maker Loliware. “Seaweed represents an opportunity everywhere you look.”

Loliware first got ­attention on Shark Tank for making edible cups; it’s since moved on to straws. The seaweed-based, pastel-colored products are compostable and marine safe, and companies as diverse as Marriott, the liquor company Pernod Ricard, and the Museum of Modern Art have picked them up. The Beacon, N.Y.-based company is in the process of developing seaweed cutlery in anticipation of the EU ban on plastic cutlery in the first quarter of 2020. They’re also crafting paper from seaweed — “the first aquatic paper that doesn’t use terrestrial based resources, or trees,” according to CEO Briganti — and seaweed products to replace the polybags prevalent in fashion merchandising.

“We see our products as gateway foods to introduce the American consumer to kelp,” says Lia Heifetz, who started Barnacle Foods in Juneau, Alaska, with her partner, Matt Kern. Their products feature bull kelp, native to the Pacific Coast, in familiar guises like salsa. New to their line is Bullwhip hot sauce, which delivers a slow burn and a big hit of garlic, along with peri peri peppers and, of course, kelp.

Sporting a bottle that looks like it washed up on the shore, Seaside Gin from Sheringham Distillery in Sooke, B.C., was named the best contemporary gin at the 2019 World Gin Awards, beating out 236 contenders. Its signature ingredient, wing kelp, is harvested from the Pacific, about a mile from the distillery. Co-founder Jason MacIsaac, a retired chef, likens the effect of seaweed in the spirit to finishing a dish with salt. Sheringham also produces an aquavit that highlights briny kelp. In 2020 the distillery will bring out a barrel-aged aquavit.

Two of seaweed’s biggest moments of 2019 came courtesy of Notpla, the London-based packaging company that crafts products from French seaweed. First was their sports drink-filled Oohos that replaced plastic bottles and cups at the Virgin Money London Marathon. Then came the Glenlivet “Capsule Collection” made from Notpla’s edible pods filled with whisky.

For 2020, founders Pierre Paslier and Rodrigo Garcia Gonzalez are focused on products lesser-known in the war on plastic: ketchup and mayo packets and cardboard takeaway containers, which look innocuous but are often coated with eco-unfriendly products like Teflon. “The little condiment packs are a combination of plastic and aluminum, but recycling is not usually an option because they’re so small, and it’s easy for them to end up as litter in the environment,” says Paslier. Notpla’s condiment capsules are already being used in trial runs in 20 London restaurants with the Just Eat delivery service.

“If you think about recycling clothes, it’s a very surface level approach that doesn’t get to the core of the problem of fashion, which is a toxic industry,” says Aleksandra Gosiewski, a co-founder and COO of AlgiKnit, a burgeoning biomaterials B2B company in Brooklyn. They produce kelp-derived yarn and are working with brands to create a supply chain for products such as footwear and accessories as well as clothes, all of which are made to degrade instead of taking years in landfill. “We are creating materials that can be used in everyday products like a t-shirt … material durable enough that won’t wash away when you wear it in the rain, but that will biodegrade quickly when you no longer need it,” she says.

Using kelp sourced from New England ocean farms, New York’s Akua has introduced high-protein, high-fiber vegan jerky that co-founder and CEO Courtney Boyd Myers calls the world’s first “carbon-negative snack.” Over the course of the year, Akua jerky has pulled 2,000 pounds of carbon from the ocean via their ocean-farmed kelp. By March, they’ll have nine flavors of kelp jerky on the market, including rosemary maple, chile lime, and mango habanero.

Founder Michael Graham’s day job is seaweed professor at Moss Landing Marine Labs at San Jose State University. But his side gig is Monterey Bay Seaweeds, which supplies Michelin-starred restaurants from Eleven Madison Park in New York to Aubergine in Carmel, Calif., with freshly harvested product. His faintly sweet and salty sea grapes — caviarlike seaweed bubbles — go for US$60 a pound. And in 2020 he’ll introduce sea truffles, a red seaweed with hints of earthy, peppery mushrooms.

The Newfoundland Distillery’s Gunpowder & Rose Rum features seaweed in an unconventional way. Traditionally, sailors were given a ration of rum that was proofed—sprinkled with gunpowder and lit to prove that it had enough alcohol. Co-founder Peter Wilkins tried to recreate it. “Health Canada weren’t convinced,” he says. As an alternative, he sourced local ingredients that would mimic the charred taste of gunpowder—kelp for the sulphur and Newfoundland sea salt, too. More straightforward is Newfoundland’s seaweed gin flavored with locally harvested dulce that earned double gold at San Francisco World Spirit Competition in 2018. Next for Newfoundland Distillery is seaweed-infused bitters.

Josh Rogers quit Google to start Portland, Me.-based Cup of Sea, where he makes blends of savory teas that highlight seaweed. Sea Smoke is a mix of dulce and lapsang souchong, whereas Bold Coast Breakfast is a black tea with seaweed nutrients hiding inside it. Rogers also pushes seaweed products at Heritage Seaweed, his year-old store in Portland and is developing products including chocolate and bath soaks. In 2020 he’ll expand his seaweed portfolio to include umami cocktail bitters and an infused olive oil.

Former diplomat Briana Warner heads up Atlantic Sea Farms in Saco, Maine, the largest kelp aquaculture business in the U.S. She calls out her business as a local economy booster: The Gulf of Maine is warming faster than 99 percent of the world’s oceans at a time when the state’s coastal economy is dependent on the lobster industry. Her products include Sea-Chi, a spicy marine version of kim chi, and Sea-Beet Kraut, a reddish-­purple, fermented raw kelp condiment made with beets and carrots. Atlantic Sea Farms plans to expand harvest and production from 250,000 pounds this year to 600,000 pounds in 2020.