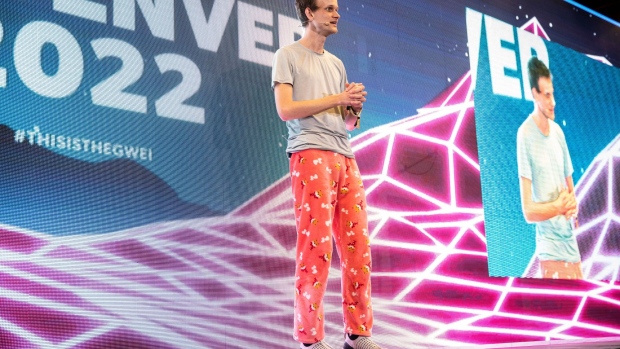 Vitalik Buterin, co-founder of Ethereum, speaks during ETHDenver in Denver, Colorado, U.S., on Friday, Feb. 18, 2022. ETHDenver is the largest Web3 #BUIDLathon in the world for Ethereum and other blockchain protocol enthusiasts, designers and developers. , Bloomberg

(Bloomberg) -- Ethereum co-founder Vitalik Buterin said the blockchain’s software transition is unlikely to be significantly impacted even if some miners gravitate to alternative chains to mint tokens.

Ethereum Classic, an earlier fork which still uses the proof-of-work mechanism that relies on massive electricity, could be one of the biggest beneficiaries of any miner exodus. Ethereum’s upgrade is expected to impact earnings for as many as one million miners. Some that are already looking for a platform for their costly mining equipment may turn to Ethereum Classic.

“I don’t expect Ethereum to really be significantly harmed by another fork,” Buterin said in a webinar on Saturday. “In general my impression from pretty much everyone I talk to in Ethereum ecosystem, they have been completely supportive of the proof-of-stake effort and the ecosystem has been quite united around it.”

Buterin’s comments come ahead of a long-anticipated major software upgrade to the blockchain that aims to reduce the extensive energy use. The switch, which has become known as the Merge, is viewed as the most ambitious technical change in the blockchain world.

Ethereum will switch from using miners -- essentially, powerful computers -- to order transactions to using much more energy-efficient coin wallets, run by so-called validators. The move to the new system, called proof of stake, has been worked on -- and delayed -- for years, as scores of developers worldwide have kept on improving and testing the software to work out any bugs.

Ethereum is the most important commercial highway in crypto, and any disruptions could cost billions and impact millions of users. The chain supports more than 3,400 active decentralized apps, allowing for everything from trading to gaming, according to tracker DappRadar. More than $40 billion is sitting in decentralized-finance applications on Ethereum, which lets users trade, lend and borrow coins, according to industry data tracker DeFi Llama. Most of the most valuable non-fungible tokens, such as CryptoPunks, live there.

Ether, the native token of the network, has a market value of about $200 billion, or less than half that of better known rival Bitcoin.

Historically, blockchain software upgrades have often been surrounded by disruptions. Back in 2016, soon after Ethereum underwent a software upgrade to reverse a major hack, it experienced denial-of-service attacks. Many crypto exchanges and other apps are expected to temporarily pause operations around the Merge as a precaution.

If everything goes smoothly, no one should even notice that the Merge has happened, Tim Beiko, who coordinates Ethereum developers, said in a recent interview with Bloomberg. And post Merge, Ethereum will consume about 99% less energy than it does today, according to various calculations.

“There were these genuine arguments that like, there were people in the Ethereum community that really believed in the immutability thing. And a lot of them went to Ethereum Classic,” Buterin said.

“Classic already has superior community and superior product” for people with “pro-proof of work values and preferences,” he said, adding but “it’s not that we’re not going to see a couple of splits on some markets in the meantime.”

Ether has declined in value along with most cryptocurrencies this year amid a collapse in demand that led to liquidations and bankruptcies. It is trading at around $1,700 on Saturday, and the value of the token has dropped about 55% this year.

“I hope that whatever happens, doesn’t lead to people losing money. Hope for the best,” Buterin said.