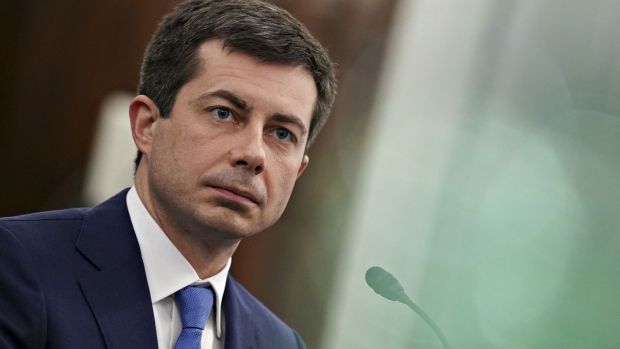 (Bloomberg) -- U.S. Transportation Secretary Pete Buttigieg said Tuesday that Congress has an opportunity to deliver a generational boost in infrastructure spending as the Biden administration readies a package that could reach as high as $2 trillion.

“If we get this moment right, we can have a once-in-a-generation delivery of infrastructure support that can be used by states, by cities, by counties, by tribes and territories,” Buttigieg said in an interview at CityLab 2021, a virtual summit for urban leaders hosted by Bloomberg Philanthropies and the Aspen Institute.

“Of course this is not the first time that a new administration has raised expectations and hopes around infrastructure,” he continued. “So we’ve got make sure that this time we actually get to deliver. But I really believe because of the urgency of the moment, and frankly because of the impatience of the public, that with some support and prodding of Washington by local leaders like some of the folks we’re gathered with today, we really can get it done this time.”

The comments come as Washington is gearing up for a debate about rebuilding the nation’s roads, bridges, electrical grids and other neglected infrastructure, one that is likely to center on how to pay for the work.

Receipts from the 18.4 cents-per-gallon federal gas tax, which has been stagnant since 1993, have been falling for years as cars become more fuel efficient, a problem the Biden administration’s push for electric cars is likely to accelerate.

Congress has relied on transfers from other areas of the budget to close a gap in highway funding of as much as $16 billion a year.