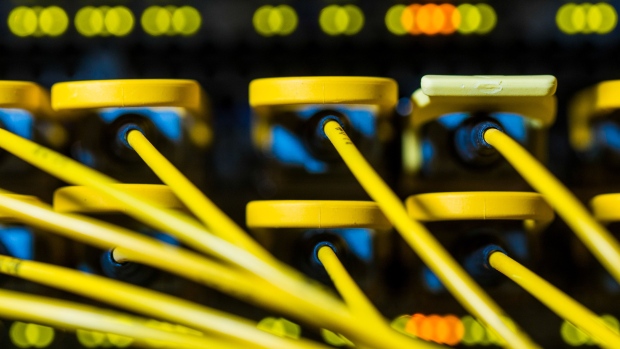 Fiber optic cables feed into a switch inside a communications room at an office in London, U.K., on Monday, May 21, 2018. , Bloomberg

Montreal-based eStruxture Data Centers Inc. said Tuesday it’s buying eight facilities from Aptum Technologies, more than doubling its locations across Canada and gaining a foothold in Toronto. The deal is the latest sign of fast consolidation among Canadian data centres, the target of several U.S.-led deals in the past two years.

U.S. investors that have gone north include Boca Raton, Florida-based Digital Colony Management, which last year helped finance the acquisition of a centre in Montreal, and in 2019 bought the assets that now form Aptum Technologies from Cogeco Communications Inc.

“We’re 110 per cent focused on Canada,” he said in an interview. “As much as we’ve looked at assets in other parts of the world, we see tremendous opportunity.”

With this new acquisition, eStruxture will have a combined 600,000 square feet over 14 sites, with a capacity of 100 megawatts -- a crucial metric for the power-hungry industry.

The consolidation in recent years has tended to focus on Montreal, said Coleman, mainly because Quebec offers cheap and relatively clean hydro-electricity. The province offers “extremely reasonable” power rates, while the city has very few natural disasters and is serviced by three times as many fiber networks as Toronto, according to a report by U.S firm Vantage Data Centers.

Power costs have lured the major U.S. cloud providers to Quebec in recent years, including Amazon Web Services and Google Cloud. Another important factor was data sovereignty, with some clients requesting that sensitive data sit in servers located in Canada, according to Coleman.

The presence of U.S. giants in turn attracted infrastructure investors to data centres, which offer clients a home for their data, technology and applications. The low cost of capital and an advantageous exchange rate have also helped, Coleman said.

“Over the last five years, Canada’s been on sale from a U.S. dollar perspective,” he said. Add in cheap power and “geopolitical strife” in the U.S, “and Canada looks like utopia.”

Still, he believes having his company headquartered in the country gives it an edge. “Canadians love to do business with Canadians,” he said.