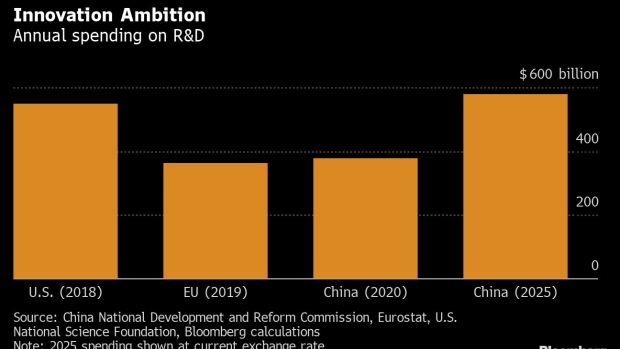 Pedestrians walk past the Great Hall of the People in Beijing, China, on Friday, March 5, 2021. China set a conservative economic growth target of above 6% for the year, well below what economists forecast, and outlined ongoing fiscal support to keep the recovery going. , Bloomberg

(Bloomberg) -- China’s economic planners are used to setting ambitious targets, and its latest five-year plan running to 2025 is no exception. Here are some of the most impressive numbers outlined by the government at its annual National People’s Congress, which kicked off Friday.

China’s leadership is worried about U.S. sanctions cutting off access to core technologies, and wants to make the economy more dependent on innovation as traditional growth engines like urbanization are slowing. A top priority is increasing spending on research and development, which covers basic scientific research and spending by companies on the development of new products.

The government is targeting 7% annual growth in R&D spending through 2025, which would bring its total spending to 3.76 trillion yuan ($580 billion) by the end of the period. That’s more than the $548 billion the U.S. spent in 2018, the most recent year for which data is available.

China wants 65% of its population to live in towns and cities by 2025, up from 60.6% in 2019. As the population will stay roughly constant at 1.4 billion over that period, that means about 50 million people will need to move permanently from rural to urban areas over the next five years.

Read more: Here’s Everything You Need to Know About China’s NPC So Far

The public health care system is underfunded by developed-world standards. Beijing is targeting a ratio of 3.2 doctors per 1,000 people by 2025, up from 2.9 today. Due to China’s vast population, that means about 420,000 extra physicians need to be trained by then. The government has a pool of more than 9 million new college graduates each year to recruit from.

China is backing nuclear power as part of its drive to cut carbon emissions. The government aims to have 70 gigawatts of nuclear generation capacity by 2025 from about 50 gigawatts at the end of last year. That would equate to about 20 new reactors.

As part of its environmental aims, Beijing wants to increase the size of the nation’s forests. Trees soak up carbon dioxide, absorb water and help reduce the flooding that plagues large parts of the country. Huge tree-planting schemes have been common for over a decade, although some are criticized because of their lack of biodiversity.