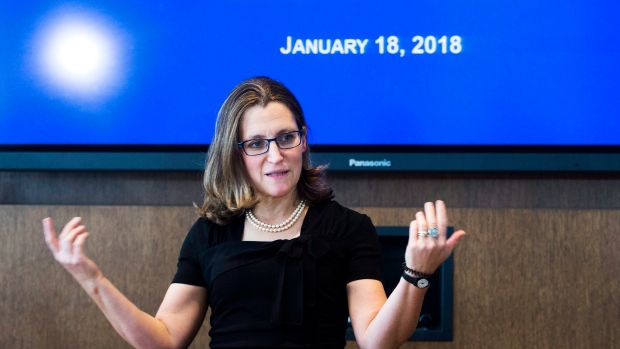 Chrystia Freeland, Minister of Foreign Affairs, hosts a meeting with members of Canada's NAFTA Council about the renegotiations of the North American Free Trade Agreement in Toronto on Thursday, January 18, 2018. , THE CANADIAN PRESS/Nathan Denette

Foreign Affairs Minister Chrystia Freeland says Canada is “ready for anything” as the sixth and penultimate round of NAFTA negotiations is set to kick off in Montreal Tuesday. In an interview Sunday on CTV’s Question Period, Freeland said Canadian negotiators aren’t taking U.S. President Donald Trump’s repeated warnings he may pull his country out of the wide-ranging free trade pact as idle threats.

“I think that it is only sensible and prudent for us to take the President at his word,” she said. “We are absolutely prepared for every eventuality. That is a whole of government preparation, a whole of country preparation. So we’re ready for anything.”

A number of contentious issues remain on the table, including the American push to secure a larger share of the parts that go into each vehicle produced on the continent. While key sticking points still loom over the talks, Freeland said there’s no reason the sixth round can’t yield progress.

“We also approach these negotiations, including the upcoming round in Montreal, with a spirit of good will and positive intent, and we are going to be working hard to get to a positive result. We think that is absolutely possible,” she said. “And we think that is the best outcome, not only for Canadians, but for Americans and Mexicans.”

Freeland said that at the end of the day, Canada can only concern itself with getting its own house in order, and that the U.S. will ultimately make its own decision in terms of its view of the future of NAFTA.

“When it comes to what the U.S. may or may not do, our approach is to hope for the best and prepare for the worst.”

Do you think Canadian corporate leaders should speak out more on NAFTA?