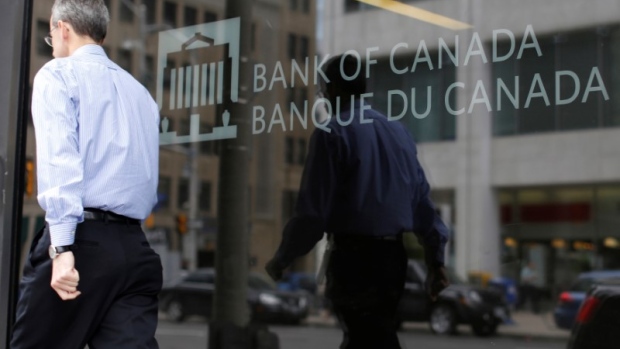 A man walks past the Bank of Canada office in Ottawa , Reuters/Chris Wattie

Canada's bond market is signalling the Bank of Canada will not reach its two-per-cent inflation target anytime soon, suggesting the central bank is unlikely to pull off more than one more rate hike even as money markets see further tightening into 2018.

Economists expect the Bank of Canada to raise its policy rate again in October after having hiked it last week to 0.75 per cent, the first increase since 2010. A second increase this year, likely to one per cent, would erase a pair of rate cuts in 2015 that cushioned the economy from collapsing oil prices.

But undershooting inflation due to structural impediments and a stronger Canadian dollar could derail additional hikes. Inflation data on Friday is likely to illustrate the conundrum: prices in June are expected to have risen at just one per cent from a year earlier, according to a Reuters poll, half the rate at the start of the year.

Moreover, yields on Canadian inflation-linked bonds that provide a long-term view on inflation expectations are hardly flashing a greenlight for more tightening.

The so-called "breakeven" inflation rate on 30-year real return bonds sits at just 1.6 per cent. It has not been above the central bank's target since 2014, when it dove alongside the slide in crude. Inflation soon followed suit.

"I don't think that inflation is going to hit two per cent," said Hosen Marjaee, senior managing director, Canadian fixed income at Manulife Asset Management. "The real return market is saying that it is not achievable."

Money markets say otherwise, at least for now. Rate futures assign a 100 percent probability of a third hike in 2018, to 1.25 per cent.

The Bank of Canada does expect inflation to pick up to two per cent in the middle of 2018 as temporary factors such as a weak pricing environment for energy and motor vehicles that have damped price pressures in recent months run their course, and solid overall growth absorbs excess capacity in the economy.

Here again, the Canadian bond market disagrees as the gap between long-dated and short-dated government bonds continues to narrow, resulting in a so-called flattening yield curve, rarely a signal of inflation.

Investors tend to demand additional yield for longer dated securities to compensate for increased uncertainty and inflation risk. But the gap between Canada's two-year and 10-year yields has narrowed to 64 basis points from around one per cent earlier this year.

"We do not think inflation is going to be getting into the target area that the Bank of Canada has in their forecast," said John Braive, vice chairman at CIBC Asset Management.

Braive expects a nine-per-cent surge in the Canadian dollar since early May to further check inflation and weigh on the economy. The stronger currency reduces the cost of imports and hampers the competitiveness of Canada's exporters, who are already contending with a drop in the price of oil, one of Canada's major exports, since the start of the year.

The economy is going to slow in the second half of the year and that will reduce expectations for both the Canadian dollar and interest rates, Braive said.

But it is the deep-reaching changes to the economy that investors see as the most significant constraint on inflation, both in Canada and other countries. They include an aging population, globalization, technological advances, e-commerce and disruptive entrants to industries such as retail.

"If Canada does achieve its two per cent inflation target I am afraid it will be far more through luck than judgment," said James Athey, senior investment manager at Aberdeen Asset Management.

"I think there are supply stories which help to explain low inflation globally and I don't see these dissipating in the next year."