Flat economic activity is better than a contraction: Strategist

Canada’s economic expansion showed signs of moderating in May and June, pulling back from a strong start to the year in the face of high inflation and rising interest rates.

Output in June was on track for a small increase of 0.1 per cent after stalling in May, Statistics Canada said on Friday. That follows three months of better growth between February and April that helped fuel a robust expansion in the second quarter, which the agency estimated at about 4.6 per cent annualized.

The numbers paint a picture of an economy that ran hot for most of the first half but is likely entering a period of much slower growth. Economists anticipate Canada’s growth rate will slow to below 2 per cent annualized in the second half of this year and into 2023.

“Growth can’t fully avoid the pull of a slowing U.S. economy and the Bank of Canada’s aggressive rate hike campaign, and we look for much cooler trends in coming quarters,” Doug Porter, chief economist at Bank of Montreal, said in a report to investors. 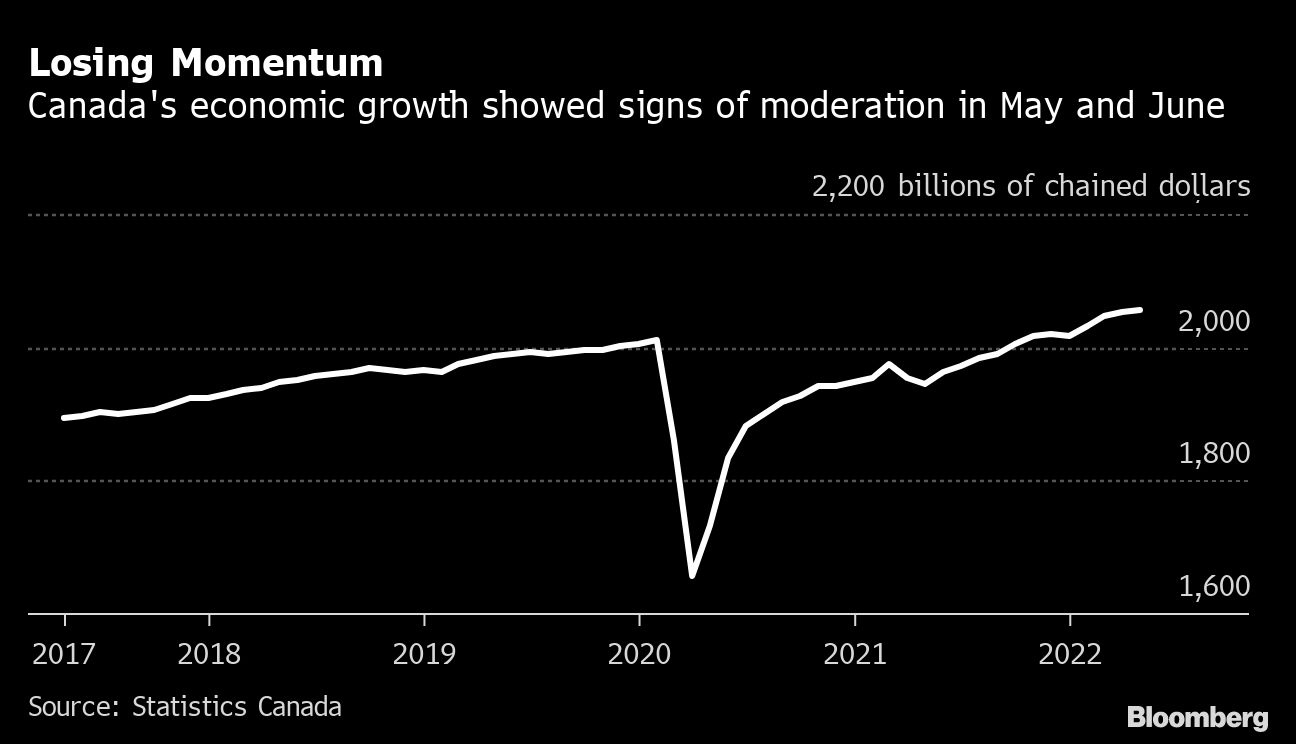 The Bank of Canada has raised its benchmark policy rate by more than two percentage points since March to slow four-decade high inflation, and is expected to raise it at least another half-point on Sept. 8.

The second-quarter growth number was even stronger than the 4 per cent annualized pace estimated by the central bank earlier this month, and represents an acceleration from 3.1 per cent growth in the first quarter -- which will only sow confidence that the economy needs higher rates.

“The Bank of Canada is still on course to deliver another non-standard rate hike at its next meeting,” Andrew Grantham, an economist at Canadian Imperial Bank of Commerce, said in a report.

The Canadian dollar was little changed at CUS$1.2822 per U.S. dollar as of 10:42 a.m. in Toronto trading. Yields on Canadian government two-year bonds rose about 2 basis points to 2.944 per cent.

Canada was the fastest-growing Group of Seven economy in the first half of this year. In contrast, the U.S. economy contracted in both quarters.

In May, growth in services-producing industries was offset by declines in goods-producing sectors, particularly construction and manufacturing, the statistics agency said. The construction sector was hit by widespread strikes during the month.

A median estimate in a Bloomberg survey of economists expected a drop of 0.2 per cent in May.