Canada posted another surprisingly strong month of job gains in a labour market that is on track for one of its best years on record.

The economy added 53,700 jobs last month, Statistics Canada said Friday in Ottawa, following a gain of 81,100 in August. Canada has now added 358,100 since December, the most in the first nine months of a year since 2002.

The strong print will only reaffirm Bank of Canada expectations that the economy has developed a certain amount of resilience to trade headwinds and global economic uncertainties, giving it ammunition to buck the global trend of lower interest rates.

“Canada’s labour market seems to have been vaccinated against the global economic flu going around,” Avery Shenfeld, chief economist at CIBC World Markets Inc., said in a note to investors. 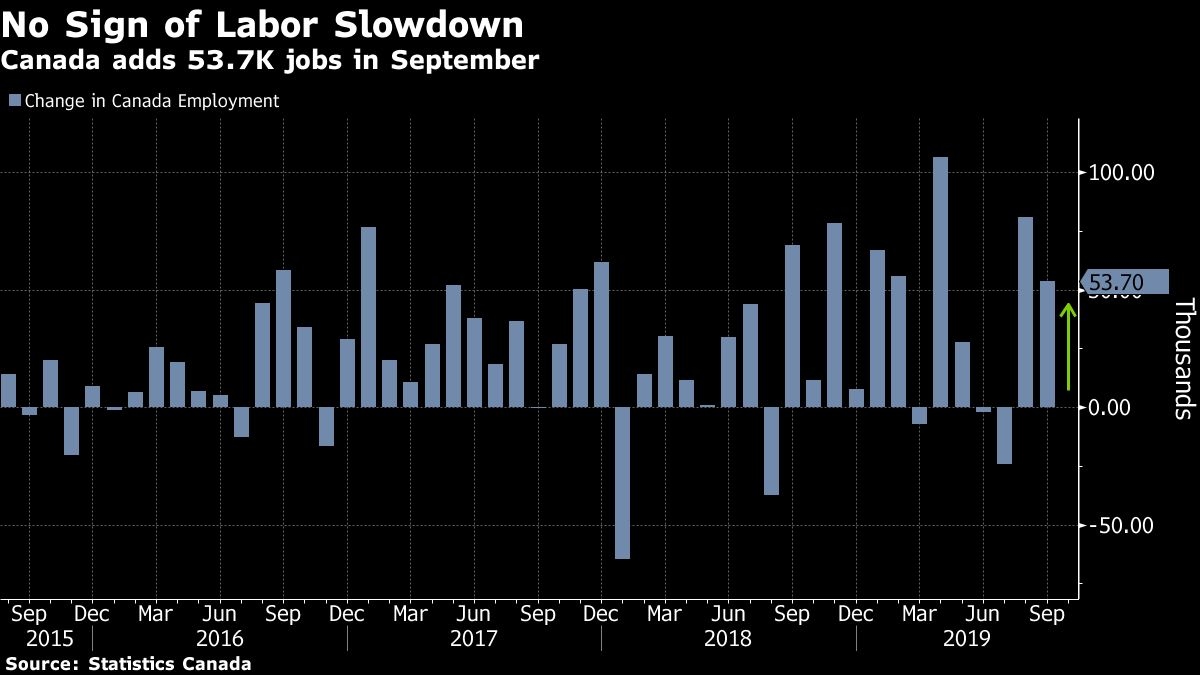 The rise in employment dropped the unemployment rate to 5.5 per cent, from 5.7 per cent in August, near the lowest in the past four decades.

Economists were anticipating just 7,500 jobs in September, with the unemployment rate unchanged. Canada’s dollar jumped after the report, rising 0.5 per cent to $1.3227 against its U.S. counterpart at 8:33 a.m. Toronto time. Yields on government two-year bonds increased 9 basis points to 1.63 per cent.

The underlying details of the report were not as strong as the headline number. While the gains were all full-time, they were entirely public-sector positions and self-employed. Private sector jobs dropped by 21,000, with continued weakness in goods-producing industries.

Few economists and investors believe, however, the country will be totally immune to a slowing global economy, and many expect the Bank of Canada will eventually be forced to cut interest rates. Swaps trading suggests one cut is still priced in over the next year.

“The Bank of Canada is likely to look through these gains and remain focused on outside Canada as it looks at a possible interest-rate cut at its next meeting,” said Brett House, deputy chief economist at Scotiabank.

The Bank of Canada’s next rate decision is Oct. 30.

On the plus side, not only is employment growing, but so are wages. Hourly pay was up 4.3 per cent in September from a year earlier, accelerating from a 3.7 per cent pace in August. The last few months have seen the strongest year-over-year increases in a decade 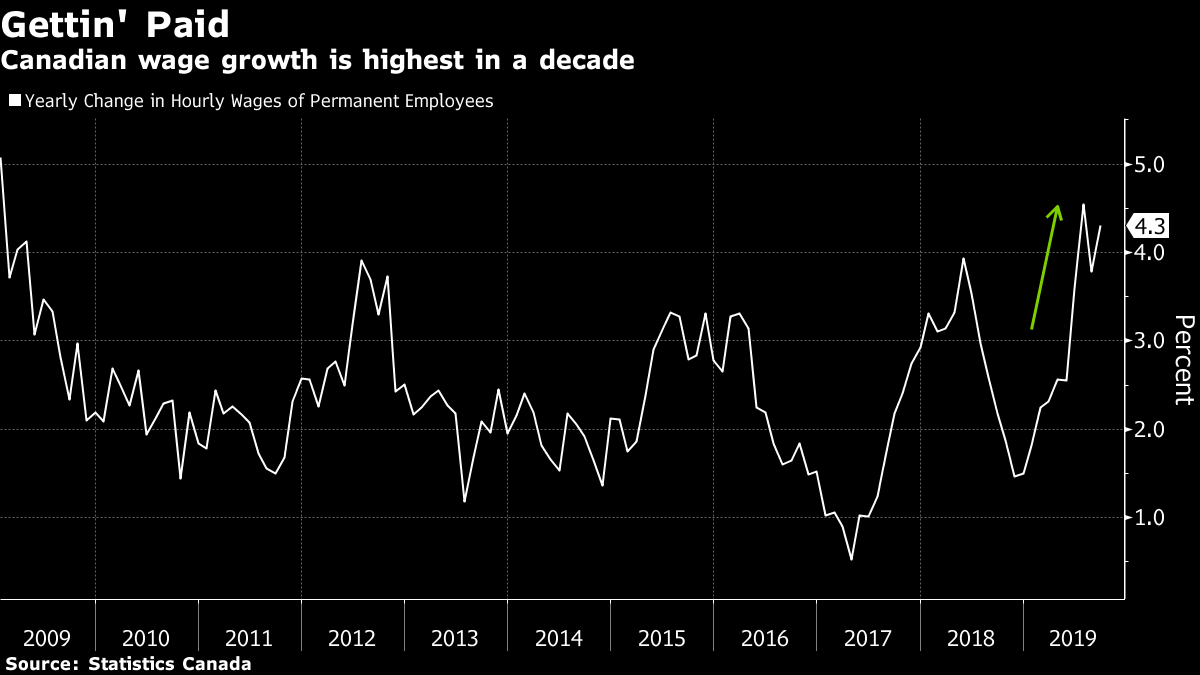 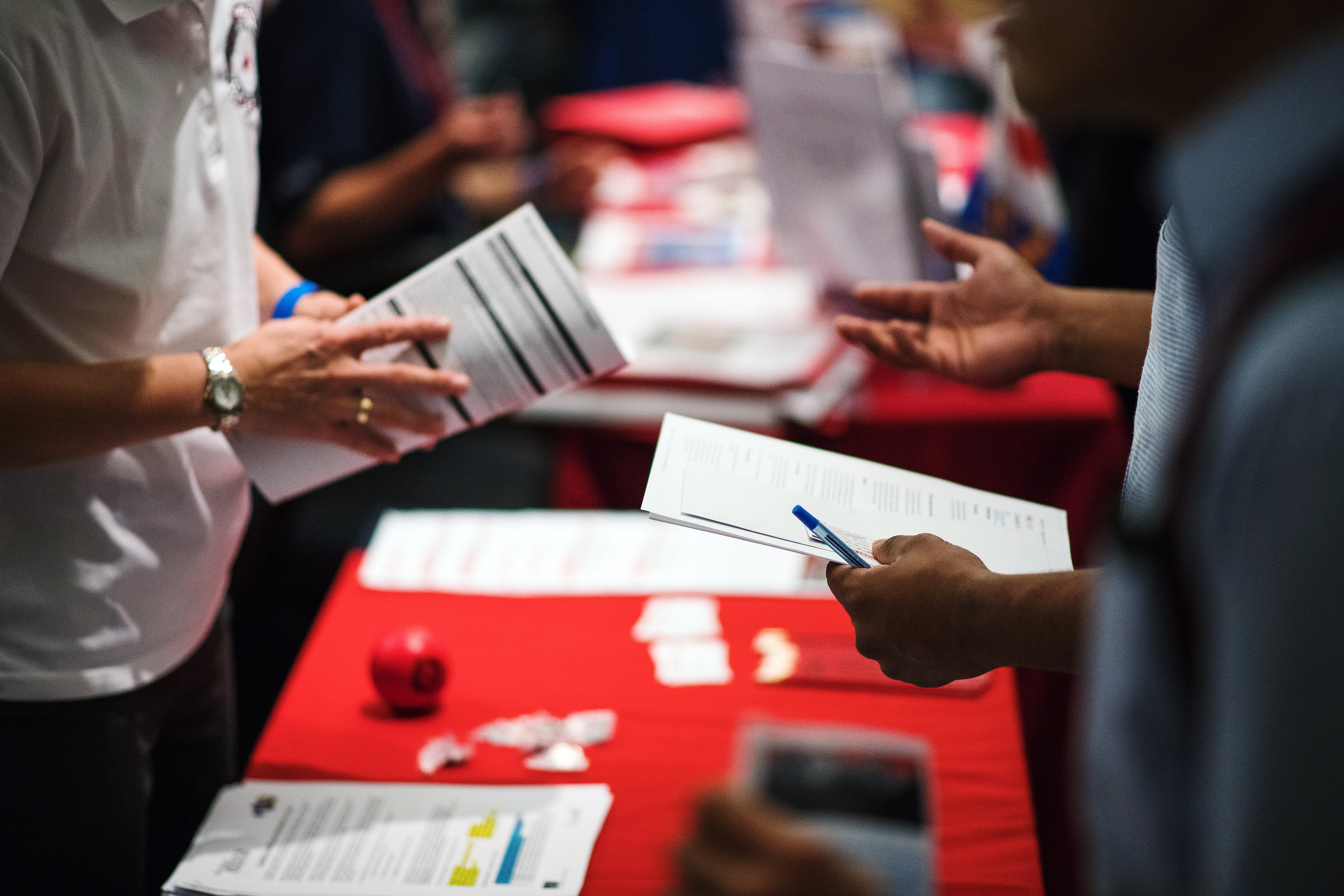 Does the latest jobs data align with your experience in the employment market?