Canada in for a 'grinding' economic growth path after July: Macquarie economist

A Bloomberg News poll taken at the end of June by Nanos Research found that only 30 per cent of Canadians who either lost their job or were working reduced hours because of the pandemic were reemployed or working more. That’s little changed from a month earlier. The latest job posting data from Indeed Canada also reinforce the idea that new hiring stalled in the first week of July.

It would be a worrying development that could suggest the disruptions in the job market from the COVID-19 lockdowns are more persistent than expected.

The slowdown may not be reflected in Statistics Canada’s labour force survey out Friday. The statistics agency is expected to report a 700,000 employment gain in June, adding to the 290,000 jobs added in May. But that too simply reflects a partial recovery of just 30 per cent of the three million Canadians who had lost their job — consistent with the Nanos data.

“The survey suggests that the initial pickup has not continued,” said Nik Nanos, chief data scientist, who conducted the poll between June 28 and July 2. The survey has a margin of error of 3.1 percentage points. 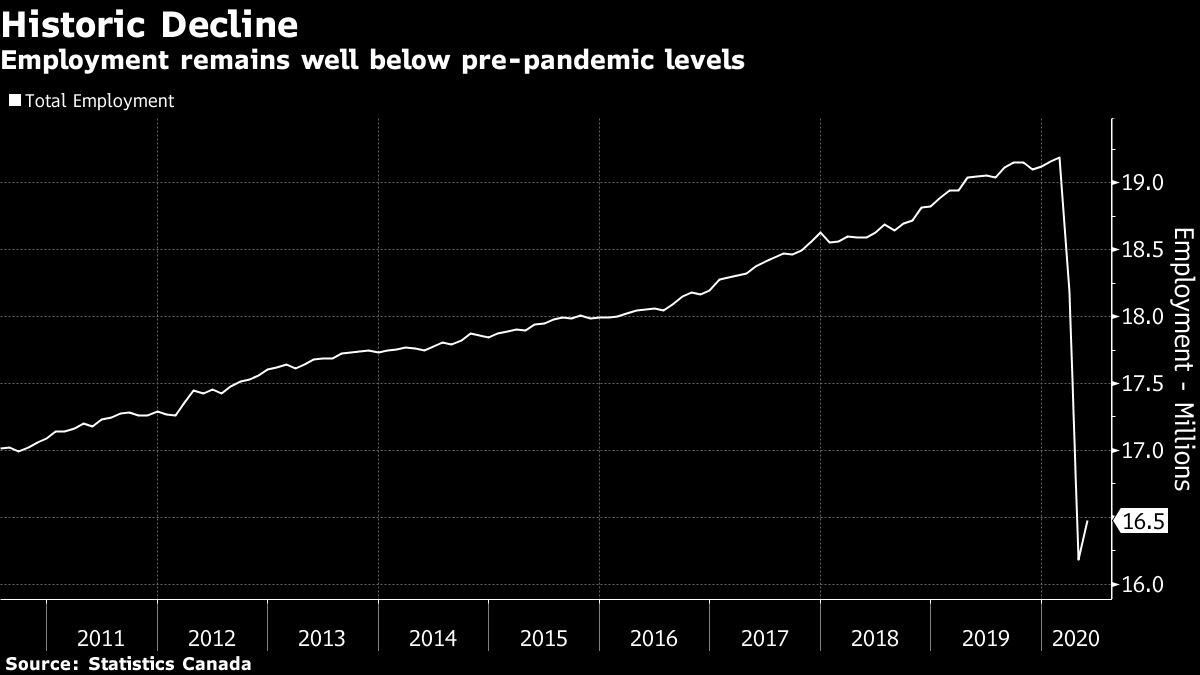 Since last month’s jobs report, Ontario and Quebec — Canada’s two most populous provinces — entered a new phase in their reopening plans, allowing most businesses to resume operations. These reopenings should be reflected in the June jobs report, although the limitations on business capacity suggest that a full recovery is a long ways off.

“Many of the personal services and accommodation services that have been hit really hard, there’s going to be some reopening effect but it’s going to be far from complete,” Brendon Bernand, economist at Indeed, said by telephone. Demand for employees by globally integrated industries like manufacturing is also subdued, Bernard said

Momentum in new job postings has softened, according to Indeed Canada. New postings last week were 21 per cent below 2019 numbers, a slight deterioration from a 19-per-cent drop the previous week.

The reference week for the labour force survey out Friday is June 14 to June 20 which should capture the reopening that happened in most of Ontario where malls, patio dining, and salons resumed business. Starting June 15, Quebec — outside Montreal — began allowing indoor dining.

“There’s definitely been more opening since the May jobs numbers,” Bernard said. “We will have just about a full months worth of when many businesses started opening.”

South of the border, the U.S. economy added 4.8 million jobs in June, exceeding expectations, and capturing a flurry of rehiring after states lifted stay-at-home orders.

The Nanos poll found that 22 per cent of respondents had lost jobs or saw hours reduced at one point since the start of the pandemic. Of those, about three in ten have since been rehired or are working more hours.