Some of the world’s most stable banks sit in Canada. The nation’s main equity index boasts more than 170 dividend-paying companies and it has a large weighting of gold miners.

With about 124,000 cases and 9,000 deaths from COVID-19, Canada’s population has, so far, not been hit as hard by the pandemic -- one reason its job market is recovering slightly faster.

Yet a lack of coronavirus-resistant bets is holding back the rally in the S&P/TSX Composite Index while its American counterpart marches on.

Up more than 5 per cent this year, the S&P 500 Index hit a fresh record twice this week. In Canada, meanwhile, the TSX still needs to rise another 546 points, or about 3.3 per cent, just to break even for the year.

That’s the continuation of a pattern. The U.S. benchmark has outperformed Canada’s every year since 2011 except one (2016), leading to a very wide long-term performance gap. 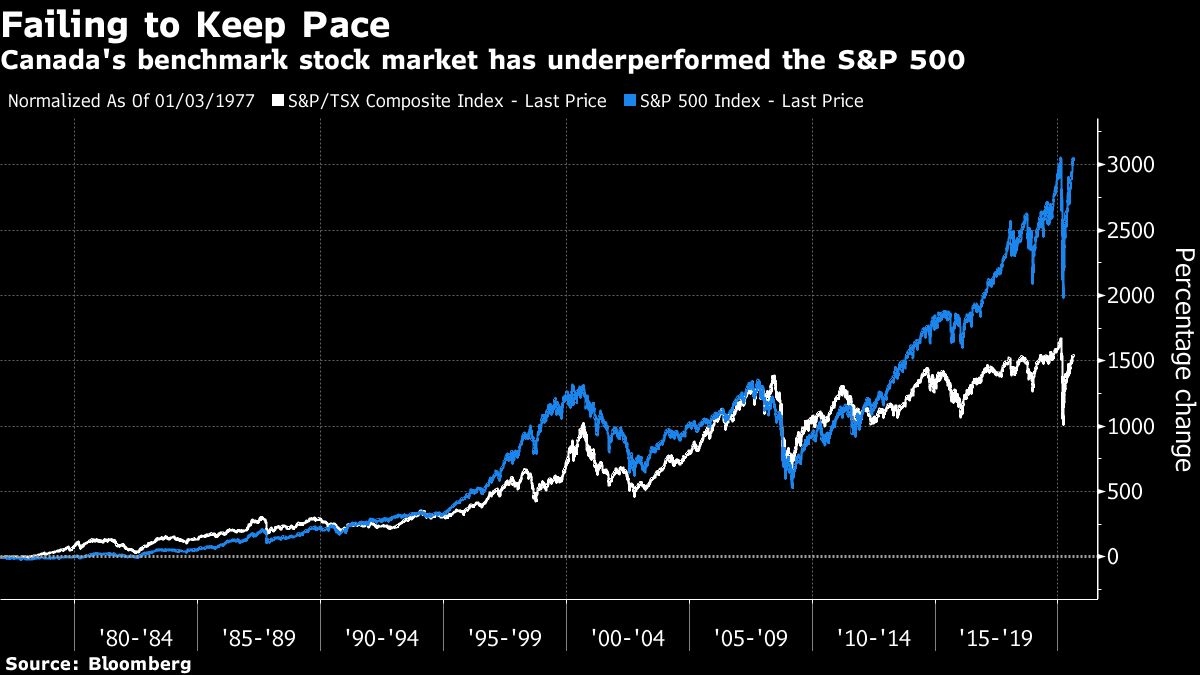 Tech and health-care stocks, two of the top sectors globally this year, make up 11 per cent of the TSX index. Real estate, energy and financials -- the three worst-performing groups in the MSCI World Index in 2020 -- make up 44 per cent of Canada’s benchmark.

“We just have a lot less of what I would call the coronavirus beneficiaries in Canada,” Mike Archibald, portfolio manager at AGF Investments Inc., said by phone. “The parts of the market that have been working, you have much more exposure in the U.S. with the S&P 500 and the parts of the market that have not been working -- financials and energy primarily -- is really where Canada has much more exposure.”

Gold miners and software companies, including Shopify Inc. and Enghouse Systems Ltd., have been among Canada’s handful of virus-proof stocks. Their impact on the overall market pales beside the “hundreds of names” with positive growth in the U.S., Archibald added.

Investors have also avoided or sold some dividend-paying stocks. Real estate investment trusts have suffered during a pandemic-driven recession and bank profits will continue to take a hit, as loan losses rise and rates stay low. But there have been relatively few dividend cuts in either sector.

“Equity income is a very important part of asset allocation going forward. And sectors like financials in Canada lead the way in that,” Brian Belski, chief market strategist at BMO Capital Markets, said by phone. “The consensus, the rhetoric around February and March, was that we were going to see dividend cuts and we never got them,” he said, adding that not investing in bank stocks would be a “mistake.”

Both Archibald and Belski are confident the Canadian stock market will break even, at the very least, this year. Despite being down for the year, its still among the top-performing developed markets, according to data compiled by Bloomberg.

“As the recovery continues to proceed, we believe that Canada or the TSX will hit a new high,” said Belski.

With low rates and bond yields, “equities are still the only game in town,” said Archibald. “I think it’s just a matter of time before the TSX cracks green this year.”