Canada’s economy probably expanded at the fastest pace ever in the third quarter, but the momentum will be short-lived as the country deals with a second wave of COVID-19 and renewed social restrictions.

Economists anticipate gross domestic product grew 47.7 per cent on an annualized basis in the July-to-September period on broad-based gains after businesses reopened from initial lockdowns. Statistics Canada is due to release the numbers at 8:30 a.m. Tuesday, along with a flash estimate for October that will probably show the first effects of business closures in some regions.

“It’s been a bit of an everything recovery in the third quarter,” Nathan Janzen, an economist at Royal Bank of Canada, said by phone. “Retail sales was the first to bounce back to year ago levels in June. The housing market rebounded extremely sharply over the summer so that should support a recovery in residential investment.”

Still, a second wave of COVID-19 is putting the brakes on growth. Economists at many Canadian banks are reworking forecasts based on the flurry of new restrictions in virus hot spots with daily new case averaging in excess of 5,000 nationwide, far more than seen in first wave and on track to quadruple without reduction in social contacts. 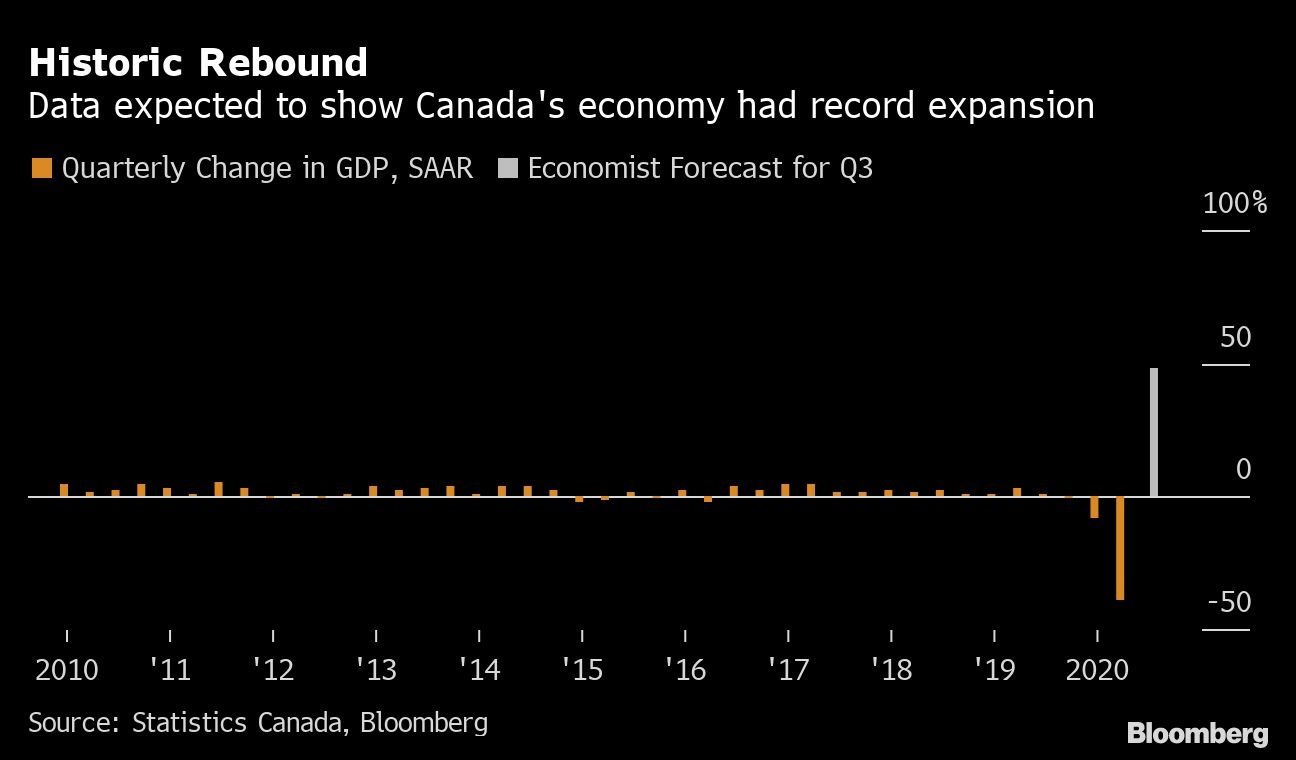 Bank of Montreal fine-tuned its call following stricter clampdowns in the Greater Toronto Area. Chief economist Doug Porter estimates the new measures that have been rolling out across the country since early October could leave fourth-quarter growth essentially flat.

The measures will weaken fourth-quarter growth to around two per cent, Sri Thanabalsingam at Toronto-Dominion Bank predicted. “November and December are going to be considerably weaker given the restrictions,” he said by phone.

The economy had been doing well coming out of the summer. A preliminary reading from Statistics Canada showed a 0.7 per cent increase in September, which economists say will still provide some momentum heading into the final months of the year.

Housing will be one of the biggest contributors to the third-quarter expansion, Janzen said. He estimates residential investment, which includes construction, renovation and ownership transfer costs contributed about one-eighth of the total growth.

“We had an exceptionally strong summer in the Canadian resale market and housing starts never really slowed significantly in the spring,” he said.

Vaccine news could provide a lift. Prime Minister Justin Trudeau said Friday widespread vaccination against COVID-19 will begin early in 2021, and is expected to inoculate a majority of Canadians by this time next year.

“There is some light at the end of the tunnel with the vaccine news,” Janzen said, adding vaccine distribution could lead to a “stronger and more sustainable” rebound in late 2021. Still, “the next quarter or two will probably still be pretty tough for the economy.”