Trudeau not keen to set fiscal targets amid record spending

Prime Minister Justin Trudeau should direct more of his government’s COVID-19 plan to programs that encourage consumers to spend on services like restaurants, minimizing leakage of cash out of the economy, according to Canadian Imperial Bank of Commerce.

Canadian households are spending a disproportionate share of emergency support money on imported consumer goods, meaning government efforts aren’t as effective as they could be, Royce Mendes, an economist at CIBC, said in a report published Tuesday. More than 50 per cent of every dollar spent on clothes, for example, goes to pay suppliers abroad, compared with services such as haircuts, where most of the money goes toward paying staff and fixed costs like rent, the economist said.

“Purchases have actually been heavily skewed toward consumer goods at the expense of services during the pandemic, and that’s costing the economy and governments in Canada money,” Mendes said in the report, adding the clothing sector creates half as many jobs as the restaurant industry for every dollar in sales. 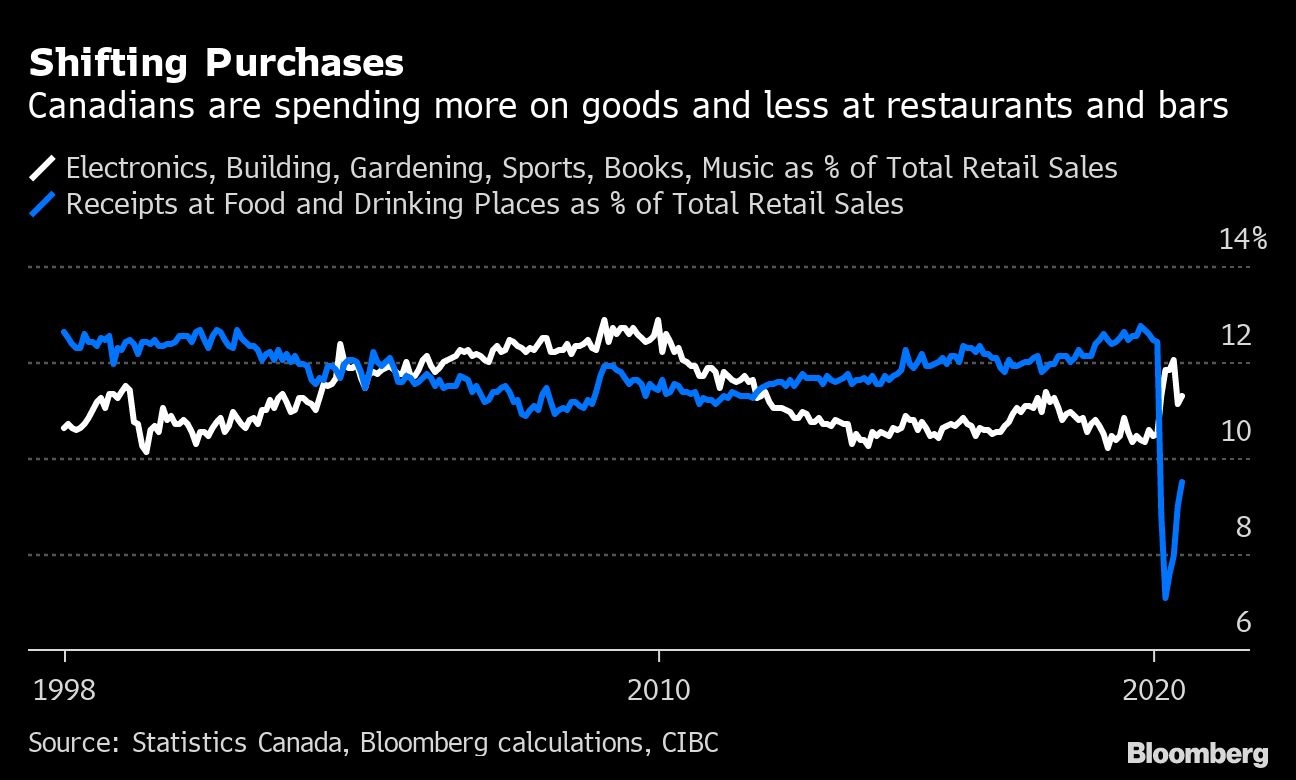 If nothing is done to fix the leakage, governments may have to spend more on fiscal support than other larger or less-open economies, Mendes said. Canada has already spent the most in the Group of 20 on its pandemic response relative to the size of its economy, yet employment and gross domestic product outcomes have been similar to those in countries such as the U.S., according to CIBC.

In July, the Canadian government estimated its budget deficit would soar to $343 billion this year, or 16 per cent of total output, mostly on support for workers and businesses affected by COVID-19. It has since announced an additional $40 billion in spending.

“Now, it’s true that Canada’s dollars have translated into far fewer Covid-related deaths as a proportion of the population than the next five biggest spenders on the list,” Mendes wrote. “But it’s also likely that part of the reason Canada has had to spend so much is because of the leakages we’ve discussed.”

Governments have some options to plug the leaks, Mendes says, such as ramping up the availability of rapid COVID-19 testing to make Canadians feel safe so they can support service-oriented firms.

Other possibilities include cutting the sales tax on services or directly subsidizing indoor dining, patios or take-out food, depending on the state of local health restrictions, he said.

Although these will be costly measures up front for the government, doing nothing could ultimately cost more. “If these programs work, we might have to spend less money on propping up businesses and individuals employed in that sector,” Mendes said by phone.