Canadian employment levels unexpectedly fell for a third straight month in August and the jobless rate jumped, a potential signal interest-rate hikes have started to cool the tight labour market.

The economy shed 39,700 jobs last month, Statistics Canada reported on Friday in Ottawa, a surprise negative reading compared to the 15,000 gain anticipated by economists in a Bloomberg survey.

The jobless rate rose to 5.4 per cent from record lows of 4.9 per cent in June and July due to the biggest increase in the number of unemployed since strict COVID measures were imposed in January.

The decrease in employment and higher jobless rate may be evidence the country’s labour force is re-balancing as the Bank of Canada’s aggressive rate hikes start to cool economic growth and slow demand. The additional job searchers may likewise ease wage growth as the labour supply expands. 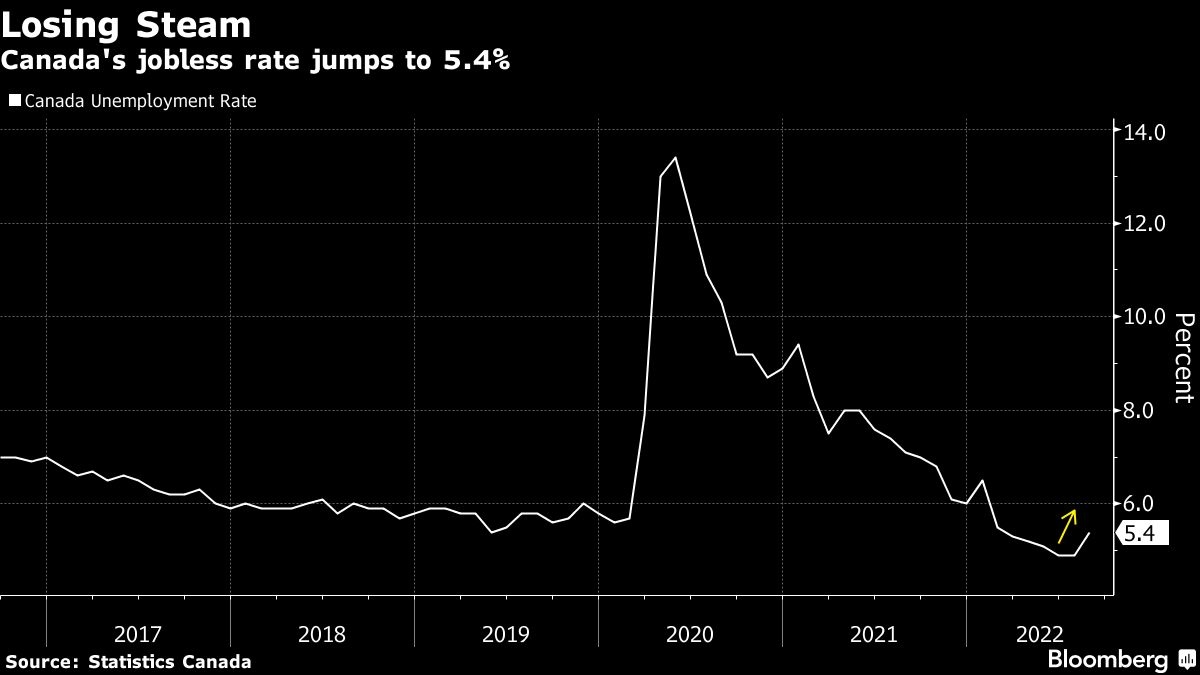 The Canadian dollar’s gain weakened slightly after the news, trading up 0.5 per cent to US$1.303 at 8:40 a.m. in Toronto after earlier climbing as much as 0.8 per cent. Yields on Canadian 10-year bonds extended declines, falling 9.6 basis points to 3.1 per cent.

“The weak headline figures may have the Bank of Canada questioning its apparent commitment to even higher interest rates,” Andrew Grantham, an economist at Canadian Imperial Bank of Commerce, said in a report to investors. But “with one more labour force survey before the bank’s October meeting, it still seems likely that at least one more rate hike will be in store before a pause is seen.”

August’s employment drop brought cumulative declines since May to 114,000, suggesting that hiring activities may be moderating. The data, however, continue to show signs of extreme tightness in the labour market, even with three months of job losses.

The average hourly wage rate was up 5.4 per cent from a year ago, compared with 5.2 per cent in both June and July. That’s the fastest increase in records dating to 1997, outside of the pandemic.

Hours worked were unchanged in August, following a decline of 0.5 per cent in July.

Labour force participation rates rose 0.1 percentage points to 64.8 per cent, while the number of Canadians in the labour force grew by 66,000 in August.

Employment declines were driven by educational services and the construction sectors. The public sector shed 27,600 positions, the bulk of August’s job losses.

The “decline in construction jobs (a sector previously booming) shows that interest rate hikes are having a impact on the labour market,” Grantham said.

Regionally, employment fell most in British Columbia, Manitoba and Nova Scotia, while it increased in Quebec. Other provinces, including Ontario, saw little change.