Canada’s biggest banks set aside 3.9 per cent more for bonuses, a relatively small increase in a year when record revenue from trading and dealmaking helped firms weather the COVID-19 pandemic.

The country’s six largest lenders set aside $16.2 billion for performance-based compensation in the 2020 fiscal year. The increase improved upon the previous year’s 2.5 per cent gain -- the smallest in nine years -- though it fell short of the 6.3 per cent average for the past decade.

“This year is going to be very challenging when it comes to bonuses,” said Bill Vlaad, president of Vlaad & Co., a Toronto-based recruitment firm that monitors compensation trends. “The rest of Canada has had a really challenging year, so the banks can’t then go out and pay investment bankers crazy bonuses. They just can’t do that optically.”

Toronto-Dominion Bank and Royal Bank of Canada, the two largest lenders, had the biggest increases to their bonus pools, while Bank of Nova Scotia -- which sold businesses and operations through the year -- was the only company to shrink its reserves for performance-based pay. 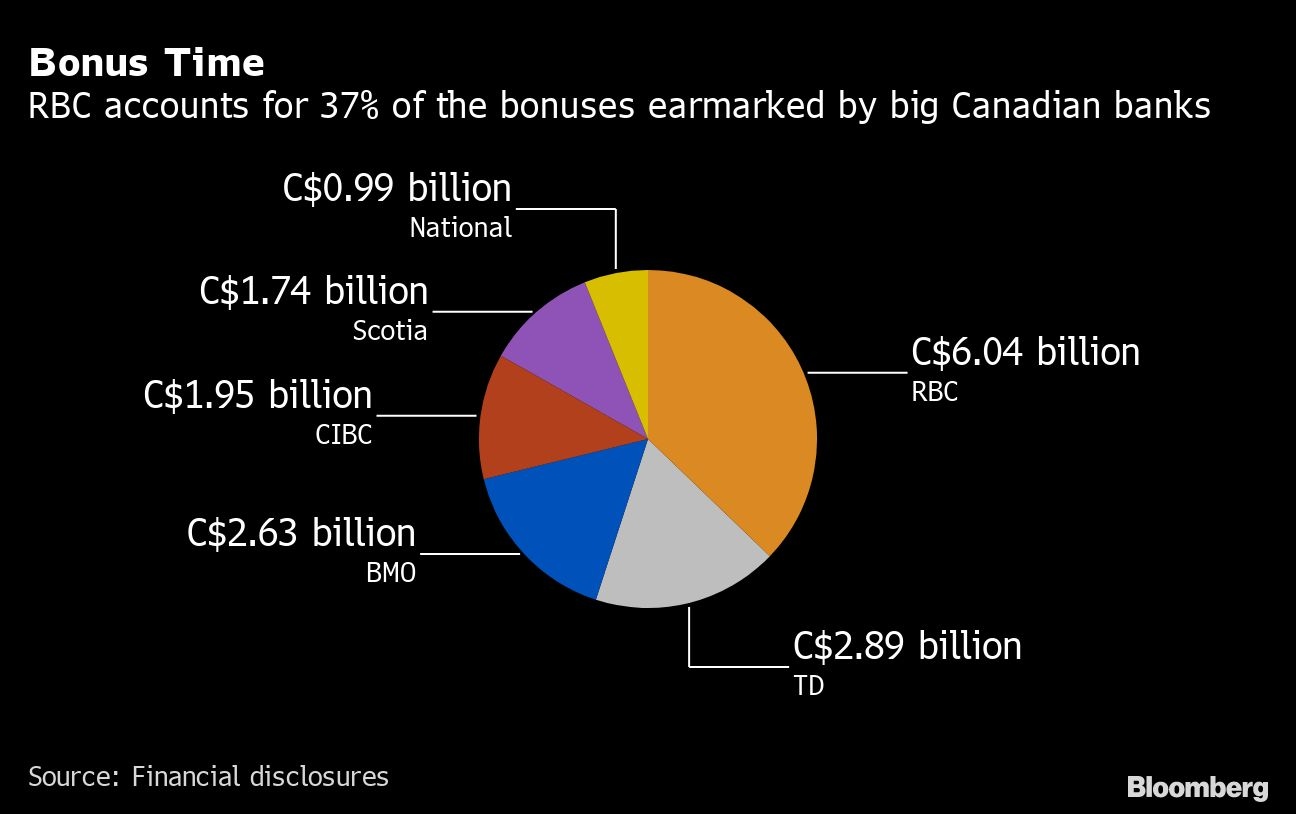 Banks saw a 22 per cent surge in annual revenue from their capital-markets operations, to about $31.1 billion collectively for the year ended Oct. 31. Underwriting and advisory fees rose 23 per cent to a new peak of $5.66 billion, and trading revenue soared 41 per cent to a record $16.5 billion.

Overall, the Big Six banks had $41.2 billion in annual net income, down 12 per cent from the previous year’s record. The eight-company S&P/TSX Commercial Banks Index has declined 0.4 per cent this week.

Canada’s bonus reserves may hint what’s ahead for U.S. and European banks. Wall Street traders are poised for handsome bonuses in their best year in a decade, though their investment-banking peers may be less fortunate. Traders at JPMorgan Chase & Co. may see a 20 per cent bonus boost.

In Europe, Deutsche Bank AG signaled in October that it’s planning bonus increases for top-performing investment bankers. UBS Group AG plans to raise fixed salaries for some employees by as much as 20 per cent, allowing the company to lower its bonus pool.

“There aren’t a lot of bonuses to go out when you divide it by the number of people that are still on at the firms,” Vlaad said. “The banks have an unnatural, invisible hand that is coming in and has restricted them from having any material layoffs, so they haven’t been able to be as efficient as they’d like to be because of their promises to the Canadian public.”

The six banks’ workforce totals about 378,400, down three per cent from last year, with Scotiabank shrinking the most after selling operations in the Caribbean and winding down other businesses. Bank of Montreal’s and Canadian Imperial Bank of Commerce’s ranks also shrunk after the two companies announced cost-reduction measures before the pandemic. Job cuts across the industry could have been higher if not for COVID-19, with chief executive officers vowing that employees wouldn’t lose their jobs due to the pandemic.

Here’s a bonus breakdown by bank:

Canada’s largest lender by assets set aside $2.89 billion for incentive compensation, with its 6.2 per cent increase the highest since 2017. The pool reflects employees’ ability to keep the bank serving customers and running efficiently throughout the pandemic, Chief Financial Officer Riaz Ahmed said in an interview.

“Bonuses are linked to performance, and overall some of our businesses have done very well,” he said. “We’ve also made sure we’ve continued to look after all of our people through the pandemic.”

Royal Bank, which has the biggest capital-markets division among Canadian lenders, set aside $6.04 billion for variable compensation, a 5.9 per cent increase and the highest total for the Big Six.

“We take a very balanced approach to compensation with consideration of the external environment in the long-term interest of both our employees and our shareholders,” CFO Rod Bolger said in an interview. Market-driven businesses such as wealth management and capital markets will see rates “according to what the market pays, and both of those businesses had strong performance this year.”

Still, overall earnings at Canada’s second-largest lender were down, “so a lot of our employees will see lower variable compensation this year,” Bolger said.

Scotiabank’s performance-based compensation pool fell 1.3 per cent to $1.74 billion, its first decline since 2015, even as Canada’s third-largest lender posted record revenue from its capital-markets operations as trading reached an all-time high.

“It’s not all about ‘eat what you kill’ because we want them to be good corporate citizens,” CFO Raj Viswanathan said in an interview. “We want to compensate them appropriately when they have a good year,” but employees won’t necessarily receive a specific percentage of the business they generate.

Scotiabank’s compensation calculations take into account the company’s performance relative to its projections, and that’s weighing on compensation this year because of how the pandemic hurt business, he said.

“The overall variable compensation of the bank is down because the bank’s performance has been lower” in the second and third quarters, Viswanathan said.

Bank of Montreal raised its set-asides for variable compensation 0.8 per cent to $2.63 billion, its smallest increase in at least eight years.

“We’re committed to the principles of paying for performance and providing market-competitive compensation for our employees,” CFO Tom Flynn said in an emailed statement. “This year, we are comfortable with how well we have adhered to those principles, for both bonuses and total compensation.”

The fifth-largest Canadian lender allocated 4% more for performance-based pay, reserving $1.95 billion, a reversal from the previous year’s 4.7 per cent contraction.

“We believe in paying competitively and paying for performance, and that philosophy is applied,” CFO Hratch Panossian said in an interview. “This year, the level of compensation we’ve landed on we believe reflects the performance of the bank both from a financial perspective as well as doing the right thing for our clients and supporting clients through a very tough environment.”

National Bank of Canada set aside four per cent more for bonuses, with the Montreal-based lender allocating $990 million for variable compensation, rebounding from a 1.3 per cent contraction in fiscal 2019.

“We’re trying to balance a good year with the fact also that our loan losses did go up during the year and that has to be reflected,” CEO Louis Vachon said in an interview. “In the context of a pandemic, I think our approach to compensation does need to remain relatively sober. So that’s how we’re balancing things out.”