Big Canadian banks hit a speedbumb to cap off 2019

Canada’s banks ended the year with their weakest earnings growth since 2016. There may be little improvement next year, as rising loan losses and eroding margins affect bottom lines.

Bank analysts are tempering their forecasts for the next year after a difficult fiscal fourth quarter, when half of Canada’s six largest banks missed expectations. The three months ended Oct. 31 were “sloppy” and a “weak end to a tough year,” with three per cent adjusted per-share earnings growth among the Big Six banks, CIBC Capital Markets analyst Robert Sedran said. He now expects those lenders to see average earnings growth of 3.5 per cent in fiscal 2020 and 5.1 per cent in 2021.

“We see this outlook as neither negative nor positive at this stage, though it does feel like the risks outnumber the opportunities at this stage in the macroeconomic cycle,” Sedran said in a note to clients this week. “We think earnings resilience and momentum, with a little help from share buybacks, will help determine the winners in the coming year.”

Scotia Capital analyst Sumit Malhotra lowered his per-share earnings estimates for 2020, and now expects a repeat of the last year, with three per cent growth, followed by six per cent in 2021. He views stock valuations, at 10.5 times next year’s estimated earnings, and 10 times his 2021 profit forecast, as “reasonable given the uncertain growth outlook.”

“We think the sector needs to demonstrate an EPS catalyst in order to improve sentiment towards the stocks,” Malhotra said in a note Monday. 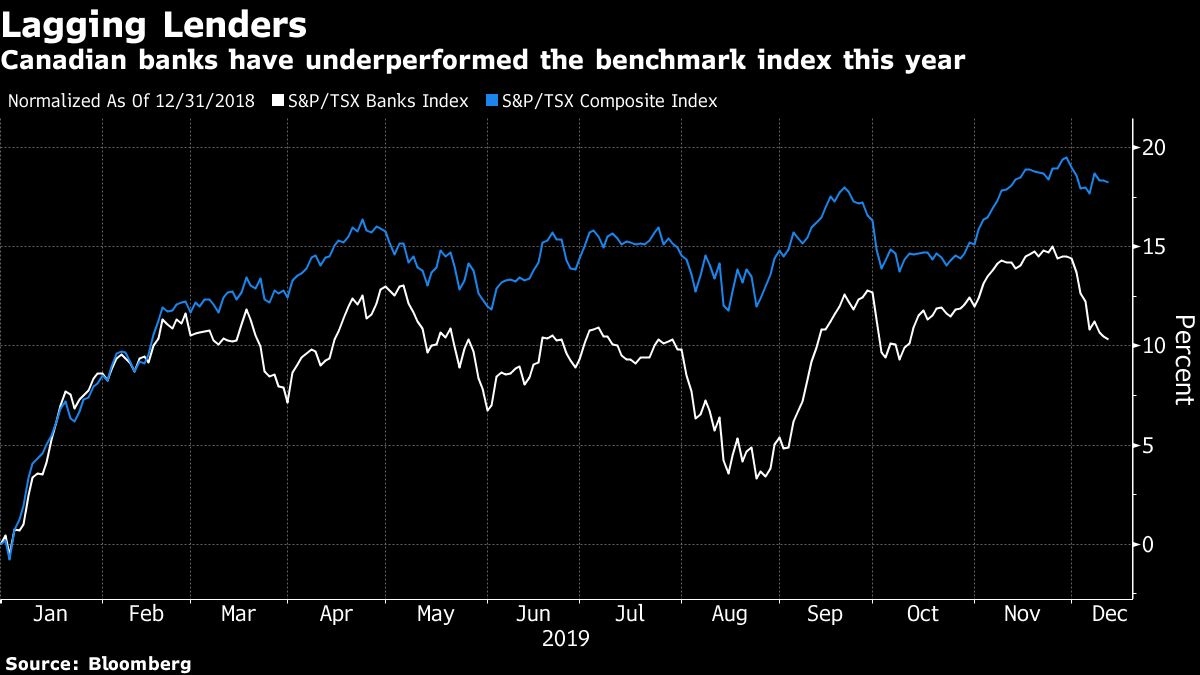 The eight-company S&P/TSX Commercial Banks Index has returned 10 per cent so far this year. The index fell 11 per cent last year, after posting an 11 per cent increase in 2017 and a 25-per-cent surge in 2016.

Canaccord Genuity analyst Scott Chan also cut his forecasts, and now sees four-per-cent growth in 2020 and five per cent in 2021. “We believe annual EPS revisions are an important factor regarding near-term share performance,” he said in a note Wednesday.

National Bank Financial analyst Gabriel Dechaine pared his 2020 earnings expectations for Royal Bank of Canada, Toronto-Dominion Bank, Bank of Montreal and Canadian Imperial Bank of Commerce for each of the next two fiscal years. He lifted his forecasts for National Bank of Canada for both years. Issues facing the banks include margin pressure from low interest rates and credit, Dechaine said.

“While credit trends are ‘normalizing’ as opposed to spiking, domestic indicators such as rising insolvency rates and November’s weak jobs data will likely maintain upward pressure on loan losses,” Dechaine said in a Dec. 8 note. He expects the industry EPS loan-loss rate to rise to 36 basis points in 2020, and 38 basis points in 2021, from 33 basis points in fiscal 2019.

Not all forecasts for the industry are so dire. Candice Bangsund, a portfolio manager at Fiera Capital, said Wednesday that Canadian banks’ fourth-quarter results “were fairly uninspiring, to say the least,” with net interest margins and flattening yield curves weighing on the industry, but the future should be brighter.

“We expect yield curves to steepen, so this should improve the profitability of the banks,” Bangsund said on BNN Bloomberg. “From a valuation perspective, this is offering some compelling value for investors who are coming back to the market. There’s lot of cash on the sidelines, so we believe this is what investors will be looking for when they position themselves for 2020.”