The Canadian market is well suited for the current environment: Barometer's Burrows

The Canadian stock market posted its longest streak of gains ever as a rally in commodities pushed the benchmark higher for a 14th straight session.

The S&P/TSX Composite Index rose 0.3 per cent to an all-time high Monday. It has added about CUS$237 billion (US$191 billion) in market value during its recent winning streak, according to data compiled by Bloomberg. U.S. oil prices hit US$85 a barrel for the first time since 2014 and metals prices also climbed, fueling Monday’s rally. Energy and materials make up about 25 per cent of the Canadian benchmark.

“The TSX is one of the best inflation hedges you can find,” Stefane Marion, chief economist and strategist at National Bank of Canada, said via phone. In a recent analysis, Marion found that the S&P/TSX posted an annualized return of 2.3 per cent during inflationary periods due to its commodity exposure, versus a decline of 5.9 per cent for the S&P 500. 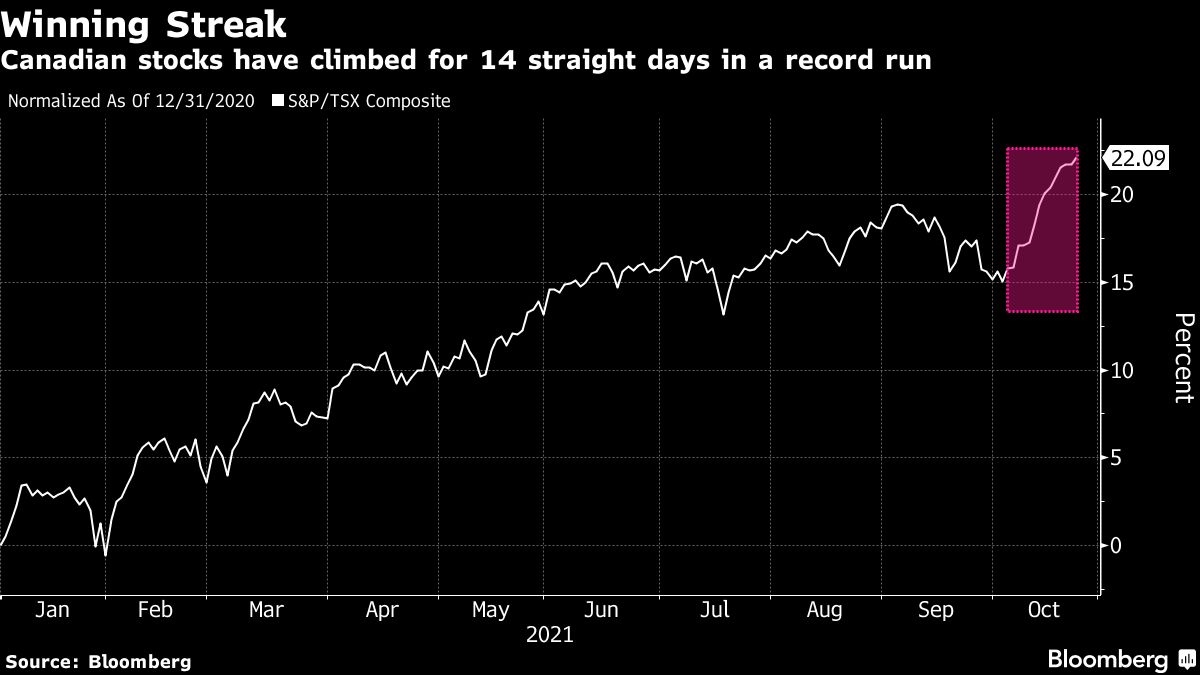 The Canadian stock market has been on a tear amid a surge in cyclical and value stocks as the nation’s economy reopens thanks to a waning COVID-19 pandemic. Energy, real estate and financials are the top gainers on the S&P/TSX this year.

Last week, the nation’s most populous province unveiled a plan to lift all public health restrictions related to the pandemic in the next six months, bringing a return to normal life into view for residents.

Foreign investors are also optimistic on the nation’s equity market. They’ve added more than US$22 billion as of the end of August, thanks in part to the run in cyclicals and also due to a strong Canadian dollar. The loonie is the best-performing currency against the U.S. dollar among its G-10 peers this year, rising about 2.7 per cent.

While the S&P/TSX has gained 22.1 per cent this year, slightly surpassing the 21.6 per cent advancement in the S&P 500, Canadian stocks are still cheap compared to the U.S. The price to earnings ratio for Canadian equities is about 15.8 times compared to the 21 times for the S&P 500.