Nearly a year ago, Canada became the second country in the world – and the first developed nation – to legalize recreational adult use of cannabis. What’s changed since then? BNN Bloomberg’s David George-Cosh takes a look at all the good that legalizing pot has brought to Canada, but also the various headwinds and challenges that have transpired over the past year. Cannabis emerged as a growth driver contributing $8.26 billion to Canada’s economy and accounted for 9,200 jobs. But the sector has seen its share of shortfalls, including the slow rollout of pot stores, the dismissal of Canopy Growth co-CEO Bruce Linton and a broad decline in pot stocks which are trading around 52-week lows.

U.S. Senate Majority Leader Mitch McConnell held court with a group of marijuana executives in California this past weekend, Marijuana Moment reports. The website details a lunch that McConnell had with about 20 people, held at the Newport Beach Country Club that included several cannabis industry representatives. Marijuana Moment added that McConnell made no legislative commitments to legalizing cannabis, but noted that it is a “complicated issue” and in made clear he understands the industry’s problems with banking access.

Canopy Growth is heading to court over its ambitious U.S. hemp plans, Hemp Industry Daily reports. The Canadian pot giant is suing Go Farm Hemp for “an interstate fraud designed to cheat Canopy Growth” out of $13 million in payments and “hundreds of acres of valuable hemp seed”, according to court documents. Go Farm Hemp countersued Canopy, with both cases filed in the U.S. District Court Western District of New York. Canopy said in its complaint that of the 1,115 acres it contracted and paid Go Farm Hemp for, about 275 acres were viable for cultivation. Canopy Growth recently announced it would spend $150 million to establish a hemp industrial park in New York state.

$6.81
-- The price of a gram of cannabis in Canada, down 3.7 per cent from the prior week, according to the Cannabis Benchmark’s Canada Cannabis Spot Index. This equates to US$2,323 per pound at current exchange rates. 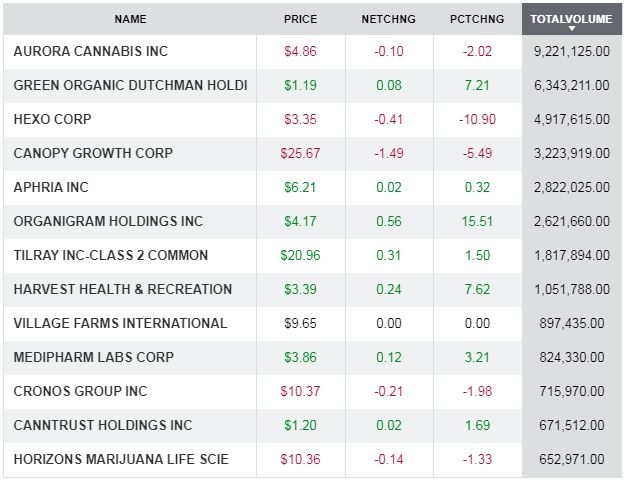