It was another tough day for Aurora Cannabis. The Edmonton-based pot giant reported its latest quarterly results Thursday. Aurora said its Q2 net revenue came in at $56 million, down 26 per cent from the prior three-month period, while reporting an adjusted EBITDA loss of $80.2 million, both missing analyst expectations. Interim CEO Michael Singer told BNN Bloomberg that it’s time for Aurora “to almost grow up and mature as an organization and start delivering … profitability.” Aurora is “recalibrating” its view of the Canadian market, while still keeping an eye for potential U.S. acquisitions. It also ruled out any further material job cuts.

Vancouver-based Invictus MD Strategies said in a statement on Thursday the company has been granted creditor protection by a B.C. court. The cannabis company, which also operates Greener Pastures and Acreage Pharms, said it sought creditor protection to “stabilize its business, pursue strategic alternatives and address near term liquidity issues.” PricewaterhouseCoopers was appointed as the company’s court monitor, while interim CEO Marc Ripa will resign from Invictus on Feb. 14. Invictus is the latest Canadian cannabis company to seek creditor protection following AgMedica Bioscience and the Wayland Group.

U.S. cannabis giant Curaleaf Holdings said the waiting period for Department of Justice antitrust investigators to decide on its acquisition of Grassroots expired on Thursday. Curaleaf, which announced it would acquire Grassroots in a US$875 million deal back in July, now expects to close the acquisition in Spring 2020 once it receives regulatory and state approvals. The Grassroots deal would add seven states to Curaleaf’s U.S. footprint while adding 61 dispensary licences to its portfolio.

Chicago-based cannabis operator Cresco Labs is bulking up its executive ranks with the appointment of Greg Butler as its new chief commercial officer, the company announced Thursday. Butler joins the pot firm after for one of its affiliates, but also has experience in senior management positions at  Pfizer, Johnson & Johnson and Molson Coors, where he was in charge of the brewer’s Miller Lite portfolio. Butler will be responsible for Cresco’s commercial strategic planning and will lead its product planning and brand M&A.

Supreme Cannabis Co. reported second quarter results late Thursday, with a 21 per cent sequential decline in revenue to $9.1 million and an adjusted EBITDA loss of $10.4 million. The company also withdrew its previously-issued financial outlook for fiscal 2020. Supreme attributed its quarterly sales decline to a shift from wholesale to retail sales, as well as $500,000 in price adjustments. Recreational cannabis sales reached $5.7 million in the quarter and accounted for 62 per cent of the company’s total revenues.  Supreme said its net average selling price came to $5.39 per gram. The company announced earlier this week it would lay off about 100 of its staff, citing a drive to achieve “near-term revenue growth.”

$1.413 billion
-- The amount of total contractual obligations owed by Aurora Cannabis to vendors over the next five-plus years, the company said in its second-quarter securities filings 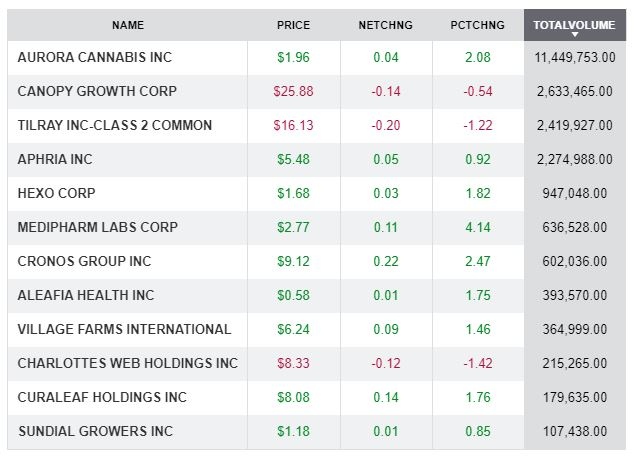