‘This is a true strategic partnership’: Auxly co-founder on Imperial Brands deal

There’s another multinational company staking its claim to the cannabis industry. Tobacco giant Imperial Brands is spending $123 million in a research and development partnership with Auxly Cannabis Group, the companies announced on Thursday. The deal nets Imperial Brands a 19.9 per cent stake in the company as well as one board seat, while giving Auxly access to Imperial’s vape products. It’s a move that should assist in rolling out next-generation cannabis products when they become legal in Canada later this year. In an interview on BNN Bloomberg, Auxly president Hugo Alves said the deal represents a vote of confidence in Auxly in executing its plan to sell into the broader Canadian cannabis market.

Quebec’s move to limit the sale of cannabis edible products later this year has drawn the ire of the province’s industry association. In a release, the Quebec Cannabis Industry Association describes the province`s move to further restrict the amount of THC in cannabis edibles and ban topical products as a “shot across the bow for all Quebec businesses and a warning to those interested in investing in the province that the regulatory climate is unpredictable and subject to change without consultation.” Meanwhile, the country’s industry association says Quebec’s move represents a win for the black market. “If implemented, the efforts of the legal cannabis industry to replace the illicit market and keep cannabis out of the hands of minors will be severely hindered,” said Megan McCrae, chair of the Cannabis Council of Canada, in a release.

Colombian cannabis company PharmaCielo said it received export approval from the Colombian government to start shipping cannabis CBD isolate abroad. The company said in a release it received final regulatory obligations from the country’s health and justice ministries to commence product exportation. PharmaCielo added it is “in advanced discussion with previously identified potential customers in multiple global markets.” A PharmaCielo spokesman told BNN Bloomberg the company is now in a position to seek commercial import permits in countries that include Canada as well as a “number of other countries on various continents.”

Canada’s Nelvana Enterprises is taking an Oklahoma medical cannabis dispensary chain to court over accusations of copyright infringement over the logo of a popular children’s television network. Nelvana said Treehouse Dispensaries allegedly copied a logo it has used in children's television programming since the 1990s, The Associated Press reported. A lawyer representing the dispensary chain disputed the accusations, saying the business made an effort to change its logo in a move to avert possible confusion. Meanwhile, Nelvana is seeking financial damages as well as a court mandate ordering the confiscation, delivery and destruction of any cannabis products that infringe on the company’s rights to its logo.

Heritage ties up with Cronos on supply deal for vape manufacturing

Heritage Cannabis landed a supply deal with Cronos Group to manufacture and produce the cannabis producer’s upcoming line of vape products. The two-year deal is worth $35 million annually and is based on future sales projections established by Cronos, the company announced in a release. PI Financial analysts said the deal represents Heritage’s first vape pen contract manufacturing agreement and validates the company as a “major player” in the cannabis extraction sector. “Contract manufacturing agreements like this one represents higher margin activities than selling just bulk crude oil and results in better economics per unit of extraction capacity,” the analysts said.

"We’re crisis communication experts; we’re not magicians."
-- Wojtek Dabrowski, managing partner at Provident Communications, on whether his firm would take on CannTrust as a client amid the company’s latest regulatory scandal. 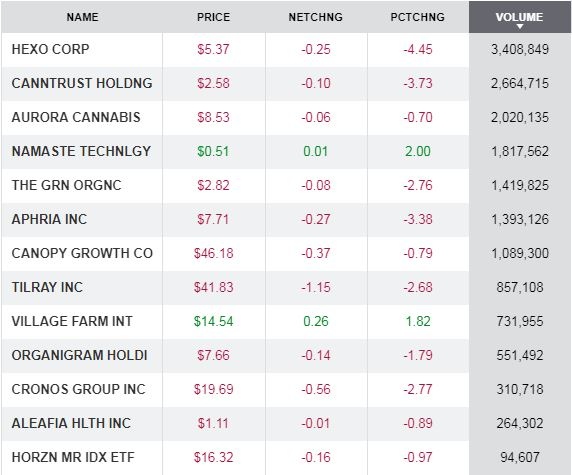