The federal legalization of cannabis in the U.S. could arrive sooner than previously expected, Bloomberg News reports. CIBC analysts said in a recent report that the U.S. could legalize marijuana at the federal level as soon as 2021 if Joe Biden wins the presidential election and the Democrats control Congress. Legalizing cannabis could assist the U.S. with the economic fallout from the coronavirus and recent social unrest across the country. Cowen analysts expect that any legalization legislation will include social justice measures. Biden's cannabis policy proposes that the drug be rescheduled to a "schedule 2" drug rather than a "schedule 1."

Where is the best cannabis grown in Canada? It's British Columbia, according to a new survey commissioned by Robinson's, a subsidiary of Auxly Cannabis Group. The survey, released in conjunction with an announcement that several Robinson's strains are available for sale in select markets, shows that 44 per cent of respondents believes B.C.-grown cannabis is the best. Right behind B.C. is Ontario, with 22 per cent of people surveyed stating that province grows the best, and Quebec with 19 per cent. The survey was conducted by Maru/Blue, which randomly polled about 1,500 adults in mid-June.

After seven months, Zenabis Global has appointed a new CEO, the company announced Monday. Shai Altman will take on the company's top job in September, replacing Kevin Coft who held the role on an interim basis. Altman previously was president of McCain Foods' Canadian operations and held similar roles at Wrigley Canada. Coft will remain with Zenabis after Altman formally takes over the CEO job, although his official title has not been disclosed by the company. Shares of Zenabis soared by about 18 per cent on Monday following the announcement.

The amount French cannabis users could be fined by police starting in September, according to the AFP​. 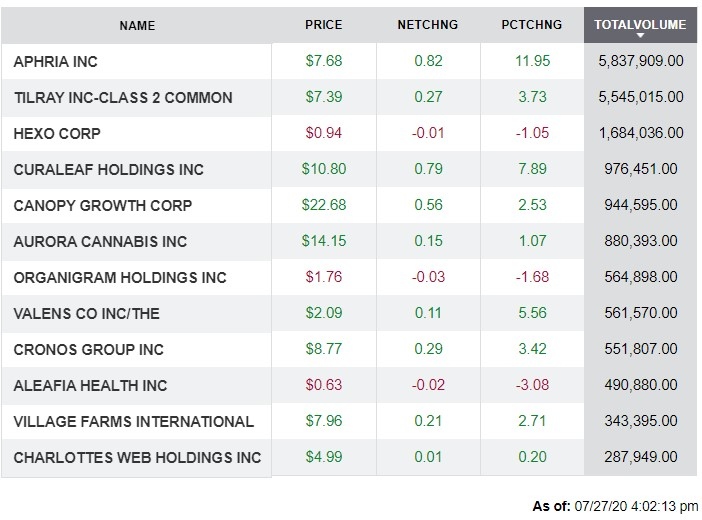