How CannTrust can help its case

CannTrust provided an update on its independent committee’s work as the company looks to get to the bottom of how it was found to grow thousands of kilograms of unlicensed cannabis last month. The company has named the four members of its independent committee, including chair Robert Marcovitch, and outlined what the group is tasked with doing. Aside from investigating the non-compliance rating from Health Canada, the committee will make recommendations to CannTrust’s board as a result of its probe and assess any impact on the company's assets and revenue. "The special committee takes these issues very seriously and is committed to working with Health Canada to bring the company into compliance,” said Marcovitch in a statement.

The game of Whac-A-Mole taking place in Toronto’s illegal pot shops continued over the weekend after police charged nine people for selling cannabis outside of two CAFE locations, the notorious dispensary chain that continued to operate despite the city’s attempts to shut it down. CAFE – which stands for Cannabis and Fine Edibles – sold its illegal pot outside store doors after police barricaded the entryways with large concrete slabs. Police also seized iPads with customer information, debit machines, cannabis products and walkie-talkie radios during the arrests.

After withdrawing its $125 million equity raise last week citing “prevailing market conditions,” Flowr Corp. returned back to capital markets on Monday announcing a $43.5 million bought deal. The company said it sold 10.6 million shares to a group of underwriters at a price of $4.10 a share, with an additional 1.5 million shares available prior to closing the deal. Flowr said it intends to use the proceeds from the bought deal to buy the rest of Holigen Holdings the company doesn’t own as well as for construction of its cultivation and production facilities.

Thailand is eyeing legal cannabis as a way to boost its medical tourism industry, a government official recently told The Bangkok Post. Pipat Ratchakitprakan, the country’s new tourism and sports minister, said he wants to include cannabis in medical tourism - especially around Thai traditional medicine and massage - to help attract tourists from Europe and the U.S. Thailand legalized medical cannabis by royal decree in February but recreational cannabis remains illegal. The value of the country’s cannabis market is expected to reach US$661 million by 2024, according to a recent report from Prohibition Partners.

$10 million
-- The amount that B.C.-based cannabis producer Zenabis will receive from Starseed Medicinal in return for an unspecified amount of dried cannabis flower and trim, the company announced on Monday. 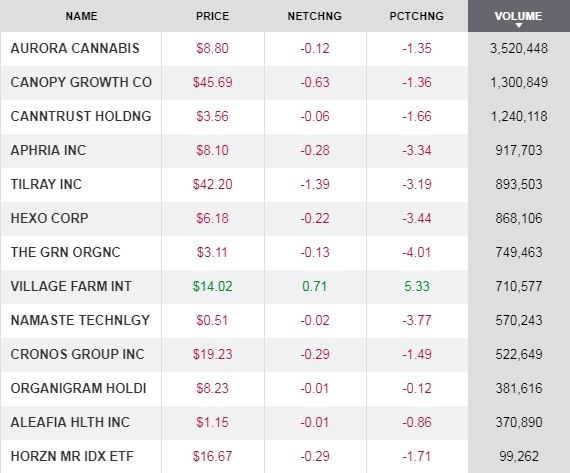