Canopy Growth sees up to $800-million charge for global restructuring

Cannabis venture capital firm Canopy Rivers made its first new investment in nearly a year on Monday, announcing it pledged $2 million to Dynaleo, a company that makes pot-infused gummies. The investment, which equates to a 12 per cent stake in the Edmonton-based company, is Canopy Rivers' first investment in a new firm since June 2019. In a statement, Canopy Rivers' CEO Narbé Alexandrian said the pot-infused gummies market has a "significant supply and demand imbalance", which could see Dynaleo emerge as a potential leader in the space.

Despite a string of layoffs as the cannabis industry deals with the fallout from COVID-19, there are still companies hiring. Bloomberg News reports that one cannabis-related job site is hiring 600 new people a week, mainly temporary positions for curbside pickup and delivery services. One U.S. cannabis operator, Trulieve, has hired around 250 people since the pandemic started, Bloomberg reports. That jump comes as Trulieve doubled its delivery vehicle fleet and expects a surge in call centre volumes, the wire service reports.

Shares of Canopy Growth got a bump on Monday after the company's biggest investor, Constellation Brands Inc., decided to exercise its warrants on the company late Friday. Constellation said it would pay $245 million in exchange for increasing its stake in the pot giant to 38.6 per cent from 33.5 per cent. Jefferies analyst Owen Bennett sees Constellation's investment in Canopy improving sentiment in the cannabis sector. "With someone like Constellation Brands, that arguably has more intimate knowledge of the space now than many, not giving up, it gives hope" that the sector can develop value, Bennett said in a research note.

333
- The number of patients in Denmark that accessed the European country's medican cannabis program in the fourth quarter of 2019, according to MJ Biz Daily. That's down from 581 in the previous quarter. 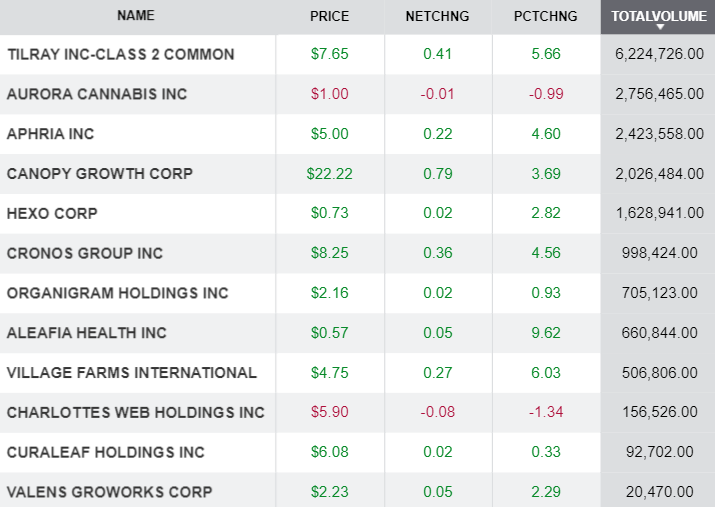