Sales of cannabis in Canada were modestly higher in December from the prior month, according to Statistics Canada. Canadians bought $55 million of marijuana in the second full month of legal sales, up about 4 per cent from November. The December sales bring the total since the market was legalized on Oct. 17 to $152 million. Digging deeper into the numbers, sales in Ontario slid from $11.7 million in October to $8.7 million in December, while British Columbia has only mustered $4.6 million in total sales in the first three months of legalization.

Two Canadian industry giants are partnering up in a move that could shake up the Canadian pot retail industry. Canopy Growth, the biggest pot company in the world, is teaming up with Quebec retail giant Alimentation Couche-Tard to form a multi-year strategic partnership involving a new cannabis outlet set to open in London, Ont. Commercial details on the deal are scant, but a Couche-Tard spokesperson told BNN Bloomberg that the company intends to pursue cannabis store licences across Canada, when they become available. Those future stores may include Canopy Growth’s Tweed brand, but the company may also consider its own in-house stores, the spokesperson said.

There may be no better place in the U.S. to grow the hemp plant than in sun-baked Florida. According to the South Florida Sun-Sentinel, the new Farm Bill allows broad hemp cultivation and the transfer of hemp-derived products across state lines, as well as the sale, transport or possession of hemp-derived products. While the state hasn’t released its regulations on how producers can grow hemp, several producers including Veritas Farms, Green Roads and Curaleaf are eagerly planning to apply for production licences as soon as possible.

New Hampshire edged closer to becoming the next state to legalize cannabis after a committee approved a bill to legalize and regulate marijuana. The Boston Globe reports that the legislation, which still needs to work its way through the state’s House and Senate before being signed by the Governor, would allow adults 21 and older to possess, purchase, and gift up to one ounce of cannabis and grow up to six plants each. While New Hampshire’s governor currently opposes legalizing cannabis, House Speaker Steve Shurtleff has stated said there may be enough votes to override a potential veto.

$6.51
– The price of a gram of cannabis in Canada, up 7.7 per cent from the prior week, according to the Cannabis Benchmark’s Cannabis Spot Index. The index has now moved to a two-month moving average of $6.45/gram and equates to US$2,232 per pound at current exchange rates. 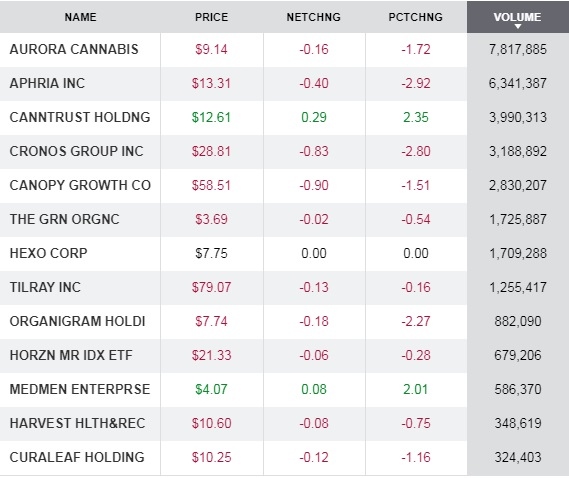