A group of 11 disqualified applicants filed judicial review applications in the Ontario Superior Court disputing their exclusion from obtaining a pot shop licence, according to legal filings obtained by BNN Bloomberg. The applicants’ motion seeks to suspend any further work by the Alcohol and Gaming Commission of Ontario on awarding licences until a judge can decide if those applicants were properly disqualified. The move could delay the opening of one-quarter of the province’s next wave of 42 new pot shops this year. The applicants’ motion centres on whether they breached a rule that they needed to provide a $50,000 letter of credit within five days of being notified that they’ve won one of the 42 spots to apply for a pot shop licence. Raymond Kahnert, a spokesperson with the AGCO, told BNN Bloomberg the regulator acknowledges the legal proceedings but had no further comment.

The U.S. Food and Drug Administration is looking to ban flavoured vaping products after reports of hundreds of cases of illnesses related to e-cigarette devices, according to Bloomberg. The announcement comes as President Donald Trump said on Wednesday that vaping is a “problem” and highlighted the risk it has toward children. The acting FDA Commissioner Norman Sharpless said the agency will soon issue regulatory guidance allowing the agency to remove flavoured vaping products from the market. U.S. officials have asked the public to stop using vape devices until public health agencies can determine the cause of vaping-related illnesses. Health Canada didn’t immediately reply to a query from BNN Bloomberg if it would follow suit with the FDA’s move.

Canopy Rivers, the venture capital arm of Canopy Growth, announced Wednesday the formation of a strategic advisory board aimed at providing the company’s executive team with guidance. Canopy Rivers appointed three business leaders to the advisory board: former Campbell Canada president Philip Donne, co-head of M&A at Imperial Brands Meg Lovell and the former CEO of OMERS Venture John Ruffolo. The appointment is the first for Ruffolo since he stepped down from running one of Canada’s biggest venture capital firms. Canopy Rivers also announced that Daniel Pearlstein, the company’s executive vice president of strategy, is no longer working at the company.

U.S. DEA to increase amount of research-grade cannabis next year

The U.S. Drug Enforcement Administration is planning to increase the amount of research-grade cannabis supply throughout the U.S next year. The agency said Wednesday it proposes to increase the amount of marijuana that can be produced for research to 3,200 kilograms from 2,450 kilograms, almost triple what it was in 2018. There are now 542 individuals registered by the DEA to conduct research with marijuana, marijuana extracts and derivatives, up 40 per cent from last year. Cannabis Wire said in a report that research-grade marijuana is pricey and hard for scientists to study because the plant remains federally illegal. The news werbsite added that the federal supply earmarked for research purposes has remained unchanged for years despite the emergence of state-regulated markets and higher potential product.

-- The amount of consumers in U.S. states that have legalized cannabis who are also vape users, according to BDS Analytics. 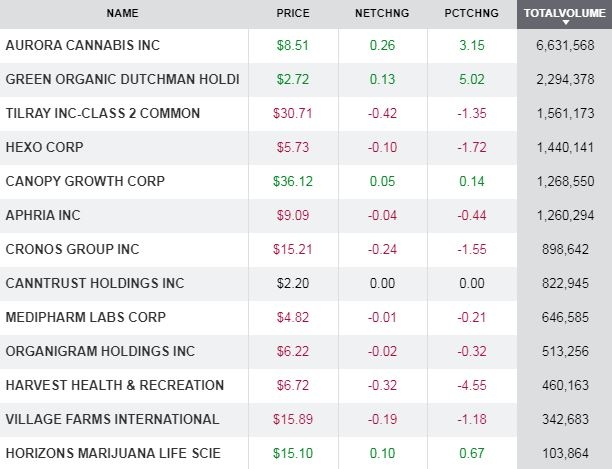