Other firms may have cheated on cannabis supply: Industry consultant

Pot shortage could last for at least 5 years, expert warns

Canada’s pot shortage could last even longer than earlier predictions, with cannabis-infused edibles and other extractables set to hit the market later this year, according to one industry expert. George Robinson, chief executive officer of RavenQuest BioMed, said Canada’s cannabis supply shortage could extend to more than five years, as marijuana producers will need to grow as much as 6 million kilograms of pot annually in order to have enough of the plant’s biomass to meet domestic demand for edible and dried flower products .

Nanaimo, B.C.-based Tilray said Tuesday it is acquiring Natura Naturals Holdings, the parent company of a licensed cannabis cultivator based in Leamington, Ont., for up to $70 million. The deal will approximately double Tilray’s Canadian cultivation capacity and help address supply shortages in the recreational market. Natura Naturals owns a 662,000 square-foot greenhouse, which includes 155,000 square-feet of capacity that is currently licensed to grow cannabis by Health Canada.

Those flipping on the Super Bowl for the commercials may be disappointed that there may not be any cannabis-related ads airing during the event. That’s because CBS is rejecting television advertisements that call for the legalization of medical marijuana, according to Acreage Holdings. The firm sent the network a proposed spot that would air during the Super Bowl next month. Despite how medical marijuana is now legal in more than 30 states in the U.S., it remains illegal on the federal level. The proposed ad, which would have cost more than US$5 million given last year’s ad rate, features two subjects who have benefited from medicinal cannabis.

Canopy Rivers, the venture capital arm of Canadian pot producer Canopy Growth, said it invested about $1.5 million in Herbert, a Canadian brand focused on developing adult-use cannabis beverage and edible products. The all-stock deal is centered on Herbert’s health-conscious focus when it comes to ingredient selection for both its food and beverage products. Herbert was created by executives of Greenhouse Juice Company, which Canopy Rivers has also invested in.

CannTrust said it has received the necessary permits from Pelham, Ont., a town about an hour away from Toronto, to proceed with the next phase of its facility’s expansion plans. The expansion, revised down to 390,000 square feet, compared to the 600,000 square feet in the company's initial application, will allow CannTrust to grow up to 100,000 kilograms of cannabis annually once construction is completed. The application comes a week after the Canadian Press reported that Pelham recently issued an interim bylaw banning any new cannabis cultivation facilities, in addition to prohibiting existing expansions for one year.

“We need better scientific understanding of [cannabis].”
– André Calantzopoulos, chief executive of Philip Morris International, on how the cannabis market remains too risky for the cigarette maker to follow rival Altria in investing in the burgeoning sector 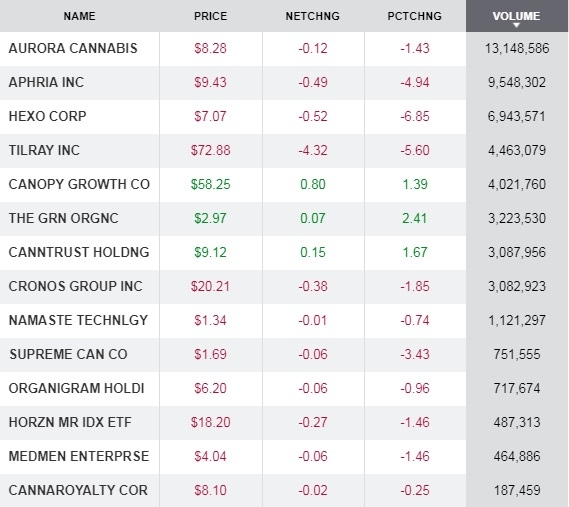