Ontario is set to conduct its second lottery for pot retail store licences, and one cannabis lawyer expects this time will be much smoother than the last. “The regulator and the winners were both learning at the same time,” said Chris Nyberg, lawyer and co-chair of Blakes’ Cannabis Group, in reference to the province’s first lottery in January. “It was a completely new set of legislations... I think this time around the regulator’s going to have a better understanding, the applicants and the professionals are going to have a better understanding, so I expect that to go quite smoothly.” The province is offering 50 licences – double the amount available in January – and has instituted stricter policies for lottery entrants.

Shares of Aurora Cannabis marched higher Tuesday after providing a fourth-quarter guidance update. The company said it expects revenue between $100-$107 million for the quarter, while analysts, on average, were expecting $111.9 million. It also estimates that production available for sale in the fourth quarter will be between 25,000 and 30,000 kilograms – above the company’s previous guidance of 25,000 kilograms. Meanwhile, the Edmonton-based pot producer said it’s tracking toward positive adjusted EBITDA (earnings before interest, tax, depreciation and amortization).

Louisiana has begun selling medical cannabis, making it the latest of more than 30 states in the U.S. and the first in the Deep South to allow the sale of medical pot in some form. The news comes four years after state lawmakers agreed to give patients access to the drug. GB Sciences, one of the two producers sanctioned by the state, started shipping medical marijuana Tuesday to the nine licensed pharmacies across Louisiana. Most of the registered pharmacies are expected to open this week.

“Over the last year, there’s been a shift in realizing that in order to move the industry forward … we need to have more evidence, more data with which to develop more specific products that work for specific people.”
-- Tyler Wish, co-founder and CEO of cannabis tech firm NACBio 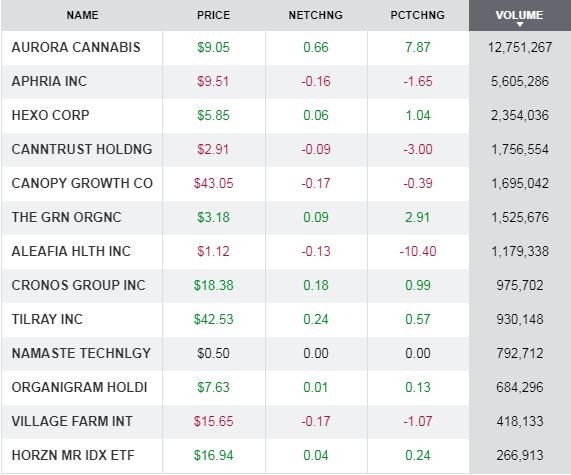