It would be a shame to shut down CannTrust: Former president Brad Rogers

A change in how Health Canada conducted cannabis industry inspections last year could have potentially opened the door for the regulatory fracas that has thrust CannTrust into the spotlight. The company’s former president, Brad Rogers – who is currently CEO of U.S. pot player Red White & Bloom – told BNN Bloomberg in an interview that Health Canada opted to streamline site inspections after the regulator was flooded with applications before the Oct. 17 legalization of recreational cannabis. “It got to a point where there was an insatiable appetite for licences,” he said. Rogers added that it “would really be a shame” if regulators were to revoke CannTrust’s production licence.

CannTrust CEO Peter Aceto expects a report on how the company grew thousands of kilograms of cannabis in unlicensed rooms to be delivered by an independent committee within the next month. Aceto told BNN Bloomberg’s David George-Cosh that the pot producer’s board of directors ha daily buzz s hired a third-party firm to conduct a "root cause analysis" which should clarify what exactly transpired for Health Canada to issue a non-compliance order on the company. Aceto also noted he’s likely to dial back his social media usage following a comment he made last week to a critic who posted on his personal Instagram account. “This has been a challenging week for all stakeholders and it's been a very challenging week for me,” he said. The company’s shares have dropped more than 40 per cent since Health Canada flagged its growing practices on July 8.

Cannabis industry fraught with a lack of diversity, risks falling into similar traps seen in finance and technology

While its early roots demonstrated signs of diversity, the cannabis industry today is increasingly dominated by men, Bloomberg reports. Now, industry insiders are growing concerned that the same lack of diversity seen in other sectors such as finance and technology will find its place in the cannabis space as well. “As the industry gets more and more appealing, more money comes in and sexism comes in,” one industry researcher told Bloomberg. There’s a notable lack of women on cannabis company boards, while there are only two CEOs counted among the 20 most valuable publicly-traded cannabis companies in the U.S. and Canada. “It’s an uphill battle,” said Jeannette VanderMarel, co-CEO of 48North Cannabis. “It takes years to change boards.”

There’s a fresh effort to legalize cannabis in Arizona, Cannabis Wire reports. Although a ballot-box initiative failed in 2016, there’s a new push to bring back the option to voters in the state next year. The campaign is fuelled by US$700,000 in funding commitments from some big players in the pot space, specifically Harvest Health & Recreation, Curaleaf, and MedMen. Momentum may be on the state’s side: A February poll by the firm OH Predictive Insights showed a majority of likely Arizona voters support the cannabis cause. However, reform is not guaranteed and legalizing adult-use cannabis isn’t the top priority for several state associations, including the Arizona Chamber of Commerce and Industry and the Arizona Police Association. 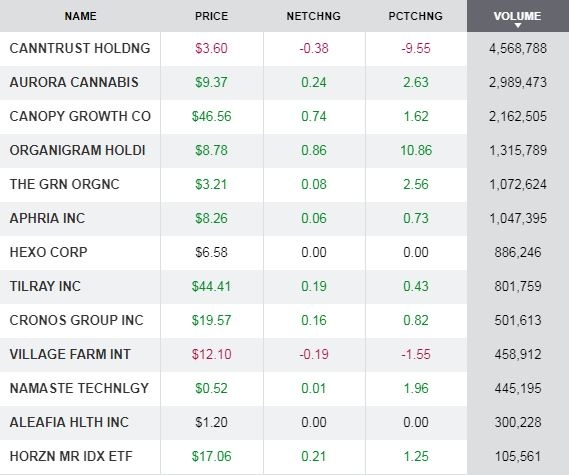