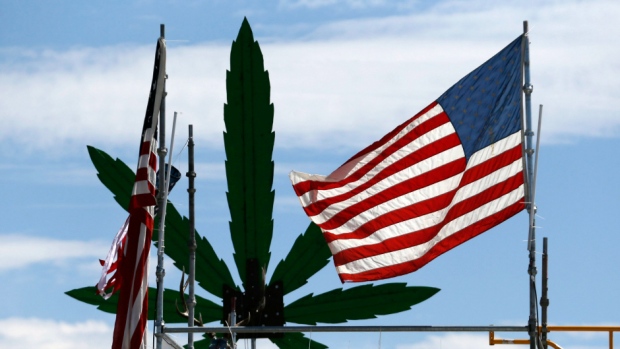 Canadian pot retailers eye U.S. expansion ahead of legalization efforts Canadian retailers are making their presence known south of the border, seeking additional growth while attempting to establish a foothold ahead of U.S. legalization plans.

"The companies are using Canada as their testing ground to get to the real prize, which is ultimately the U.S.," said ATB Capital Markets Analyst David Kideckel, in an interview.

"Compared to a lot of other Canadian large cap licensed producers that have announced grandiose U.S. entry plans, stores like Fire & Flower are being very targeted and measured in their approach."

Fire & Flower announced on Monday it signed a deal with American Acres Managers for the option to acquire the U.S. retailer once the country legalizes cannabis federally. Meanwhile, High Tide expanded its e-commerce presence in the U.S. CBD market through its platforms and its acquisition of online accessory seller Smoke Cartel for US$8 million.

Fire & Flower is following a similar pathway to the U.S. that Canopy pioneered after the pot giant struck a deal to acquire Acreage Holdings Inc. in April 2019. While Canopy is eagerly waiting for the U.S. to trigger legislation that will allow the Smiths Falls, Ont.-based firm to do business there, it has licensed its Tweed retail brand for Acreage to open branded stores in certain U.S. states.

Fire & Flower Chief Executive Officer Trevor Fencott told BNN Bloomberg in an interview that the company never had plans to operate just in Canada and the deal for American Acres has the blessing of the company's largest shareholder, convenience store giant Alimentation Couche-Tard Inc. Couche-Tard owns about 12 per cent of Fire & Flower, with warrants that would take full control over the company once they are exercised.

"We built our model to work at the highest levels of competition," he said. "Let's go where there's a massive fragmentation markets like California and Colorado."

While High Tide isn't opting for a full-scale move to bricks-and-mortar U.S. locations just yet, the company's focus is affixed to its e-commerce strategy, said Raj Grover, the firm's CEO. Right now, roughly 23 per cent of the company's sales come from the U.S. with more expected once the Smoke Cartel deal closes, he added.

He told BNN Bloomberg in an interview that several U.S. cannabis retailers have already reached out to High Tide directly for potential partnership opportunities.

"I can't even get more products in the U.S.," Grover said. "We have unlimited demand right now."

ATB's Kideckel notes there's plenty of market share to be gained as the U.S. market is still relatively nascent, but Canadian companies with strong balance sheets will find success working in the U.S.

"At the end of the day, if the Canadians bring something to the to the table that the Americans value, and there's money to be made, both for the company and for shareholders, I think that's going to win the day here," he said.

THIS WEEK'S TOP STORIES
Cronos Group reports steep US$75.2M loss in Q4, continues to hold sizable cash advantage
Shares of Cronos Group were under pressure on Friday after the company reported its fourth-quarter and end-of-year results. Cronos said it generated US$17 million in revenue in its Q4, more than the US$13 million analysts were expecting, but it also posted a steeper-than-expected loss of US$75.2 million after recording a US$15 million inventory writedown. Cronos also noted in its security filings that it observed a "material weakness" in verifying its inventory as management "failed to properly design and execute sufficient procedures to verify inventory quantities." Canaccord Genuity analyst Matt Bottomley said in a note that Cronos's cash burn has deepened in the quarter to the tune of about US$162 million annualized, while the company still has about US$1.3 billion in cash left on its balance sheet.

Cannabis continues to be a money-loser for Alberta
Alberta said the province's cannabis business is expected to generate a $15 million loss in the current fiscal year, with further losses expects for the next two years, according to the province's budget released Thursday. The western Canadian province said it also expects to make about $100 million in revenue from taxes incurred during cannabis sales this fiscal year, up modestly to $111 million in 2023. "Net income for cannabis includes retailer fees and sales revenue, less costs for administration and purchasing inventory, and is expected to remain negative for the next three years, as set-up, administration and inventory costs exceed revenue," the government said.

Wrigley heir taps SPAC to take pot company public at US$1.9B valuation
Another U.S. pot company went public this week when SH Parent, better known as Parallel, struck a deal with Ceres Acquisition Corp. to list on the NEO Exchange. The deal was the latest to see a special purpose acquisition company (SPAC) tie up with a cannabis company seeking a public listing. Parallel is run by Beau Wrigley, who led Wrigley Jr. Co. until its sale to candy maker Mars Inc. in 2008, and is valued at US$1.88 billion. Wrigley told BNN Bloomberg that he intends to use the proceeds from a separate raise of US$225 million for potential acquisitions. He said promoting the drug as a health product could help Parallel draw consumers away from the illicit market.

New Jersey finally gives the green light for recreational pot
New Jersey legalized cannabis for recreational use earlier this week, ending a political squabble that lasted three months after the U.S. state's voters overwhelmingly approved a ballot question whether to allow adult-use sales of the drug. Industry analysts polled by the Associated Press believe it could be about six months before the legalized marketplace is up and running as regulators begin to formally put in rules and licences for adult-use cannabis sales. Cannabis sales in New Jersey will face a 6.625 per cent sales tax where 70 per cent of those proceeds will go to areas disproportionately affected by marijuana-related arrests. The number of licenses for cultivators will be set at 37 for two years.

Morocco set to legalize cannabis for medical, industrial use
The Moroccan government said it will legalize cannabis for medical and industrial use next week, a move aimed at helping impoverished farmers gain new income, Reuters reports. The recreational use of cannabis in Morocco would still be banned, according to the news agency which viewed a draft bill that the government is expected to pass next week. Cannabis is mostly grown in Morocco's northern Rif mountains, which in recent years have seen protests over economic inequality. The North African nation estimates that the amount of land farmers cultivate  cannabis stands at about 47,000 hectares - the equivalent of 87 football fields - about six years ago.